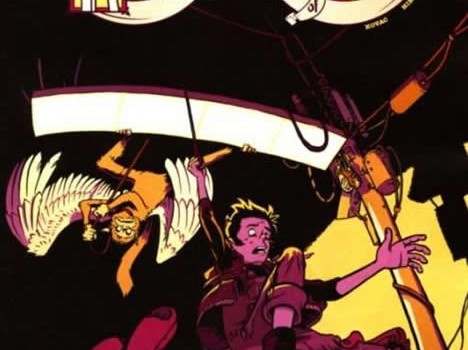 The first issue of Tommy Kovac and Andy Hirsch’s The Royal Historian of Oz playfully poked fun at writers who regurgitate treasured literary creations while indulging in the act itself. The basic premise behind the series is that Jasper Fizzle, a lacklustre writer who’s devoted his life to continuing Frank L. Baum’s fantasy books, discovers a pair of magical silver slippers that transport him to the real Land of Oz. Frank returns to Earth with several “borrowed” Oz artefacts, provoking Princess Ozma of the Emerald City to send several agents – including familiar faces Lion, Scarecrow and the Tin Man – into our world to kidnap Jasper’s cheerless son Frank.

Reading this second instalment made me appreciate just how much plot Tommy Kovac managed to cram into the first. The momentum slows somewhat this month, despite the book’s more grounded, cynical themes being displaced by the whimsical fantasy of Oz. The series’ futuristic setting, of which little has been made of so far, is briefly mentioned, and the effect that Oz’s magic is having on Kovac’s polluted cityscape is likely to be of greater importance as the story progresses. The Royal Historian of Oz #2

A brief ‘previously on’ aside, Frank’s narration has been cut entirely, which slightly robs the series of its intimacy but does allow the other characters room to breathe. Jasper is by far the star of Royal Historian, an idealistic but talentless dreamer whose passion for the Land of Oz is crippled by his storytelling deficiencies and social inadequacy. Andy Hirsch continues to bring the best out of Kovac’s sharp script, though his splendidly detailed backdrops have been obscured somewhat by this issue’s predominant night-time scenes.

Slave Labor Graphics inform me that, while the $1.00 first issue of Royal Historian was a huge success, the orders for #2 dropped substantially; enough to convince the publisher to sell the series online only from #3 onwards (www.slgcomic.com). Currently, plans for a trade paperback are not guaranteed either. A bit of a shame really, as The Royal Historian of Oz is a fun little series that plays far more creatively with its source material than other, more successful mashups such as Pride and Prejudice and Zombies.