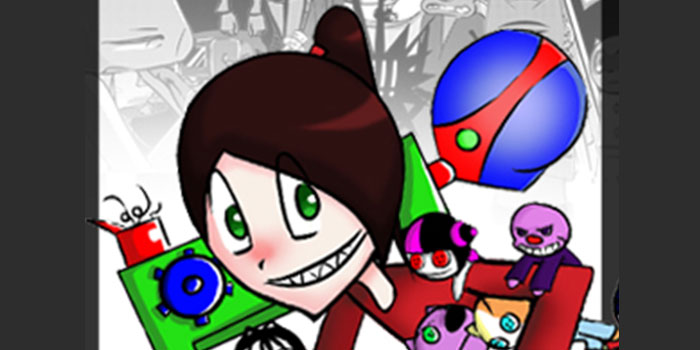 I’ve intended to start a series of indie creator spotlights for some time, and the best reason to begin yet came with the discovery of Amy Tucker, whose Mystery Club series is currently on its fifth volume, ‘Dark Poison’, with Volume 6 incoming. Amy started the series aged just eleven, and in two years has built a reputation as an artist and self-publisher that has earned her television interviews, a growing fanbase, and seen her book in Waterstones and numerous comic stores.

Mystery Club is set in a surreal world in which sole human girl Amy Abnobotchi shares a tree house with a host of anthropomorphic animals, including “renegade scientist” Professor Loco and the manipulative Tiger Streak. It’s funny and original, with a heartfelt but not slavish manga influence and a sense of playfulness throughout.

I’ve always felt that one of the rewards of blogging about self-published comics and reading through a creator’s early work is that you see them develop at a breakneck pace. Amy’s proficiency as both an artist and visual storyteller is currently far beyond her years, due to her dedication to the craft and a pragmatic attitude. Visit www.mysteryclub.co.uk to compare the first volume of Mystery Club to the last, and see just how much her storytelling has evolved. There’s a valuable lesson here to any budding artists or writers looking to make comics and get their name out there, and that’s to start today.

Anyway, I recently asked Amy a few questions in regards to self-publishing at such an early age, and her advice to other artists still gathering up the courage to start making comics: Carl Doherty: You were around 11 years old when you started self-publishing Mystery Club. That’s an enormous first step for anyone to take, let alone at such an early stage in your development as an artist and storyteller. What made you decide to dedicate yourself to both producing and publishing a regular full-length comic series as opposed to simply creating and illustrating characters in your spare time?

Amy Tucker: I’ve always liked comics, and the majority of Mystery Club characters I have been drawing and writing comics about for years. So the first Mystery Club volume was actually the fourth full length Mystery Club comic that I had created. However, I ended up liking this comic more than any of the others. Then I discovered that self publishing was an option so I just thought, “it’s worth a try!”

Your artwork on this series has evolved considerably over the past 2 years. How do you develop your illustrative and storytelling skills while balancing the comic with school and other activities?

I have a love for art and writing, so I think when you really adore something you can always find ways to make time for it and if you have a passion for something then it’s very easy to stick to.

I’m sure many aspiring comic creators will see Mystery Club and take inspiration from it. What advice would you give to any other young artists or writers also wanting to self-publish comics?

I would say to any other young comic book authors wanting to self publish, that if you are proud of the comic you’ve made and you like it then it’s likely other people will enjoy it as well!

If you care about your characters and are happy with the story you’ve created, and you feel like you want to share [it] with other people then it’s worth a shot. Of course, it does take money to print out comics and you have to be making a profit so you can keep going, so if you don’t think you will be able to do that then it’s ok, just keep working on developing characters and coming up with stories until you think you will be able to.

If you are able to print out comics (even if it’s only on computer paper) I would recommend you give it a try, because if you choose to self-publish as opposed to finding a publisher then you have complete creative freedom and you can make the decisions. I have my books in shops, which is actually easier to do than you would expect, but if you aren’t able to do that then selling comics in your school could be an option. I can see the relationship between new characters Pinky Rock and Relte (introduced in volume 5 and explored the upcoming volume 6) becoming a favourite element of the series with fans. How has this been received so far?

So far the relationship between Pinky Rock and Relte has only been explored on a few pages so it’s not a big part of the comic at the moment, however fans have said they liked the characters and I’m hoping they will like the new character and relationship developments that are to come, because a lot is going to happen with these characters!

With six volumes of Mystery Club under your belt, not to mention television interviews and web animation, what future plans do you have for the series, or indeed comics in general?

To be honest, the only plan I have for the future of Mystery Club is just to keep working on comics, improving and marketing my comic.

When you’re not working hard on the sixth and seventh instalments of Mystery Club, which comics do you enjoy reading?

The first comic I really loved was Calvin and Hobbes. Another comic I loved was Asterix. A few years later, I started to read Dragon Ball, which introduced me to manga. I then started reading darker mangas like Black Butler, Death Note, Shiki and Tokyo Ghoul.

The first five volumes of Mystery Club can be purchased at www.mysteryclub.co.uk.