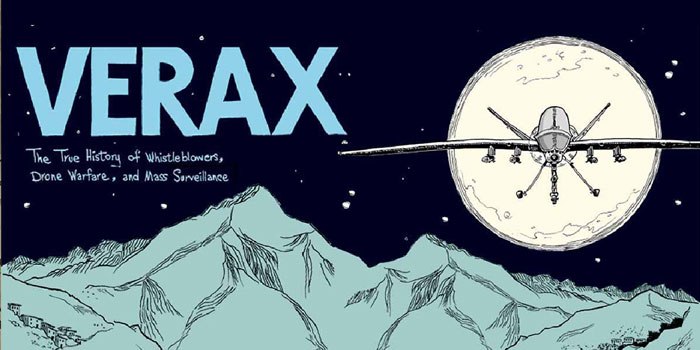 The more non-fiction comics I read, the more convinced I am that graphic journalism brings the very best out of the form. Last year, Ramin Abhari’s Nylon Years juggled dramatisation and advanced chemistry to deliver an account of the Flixborough disaster that simply wouldn’t have worked in any other medium. Likewise, Verax, Pratap Chatterjee’s account of post-9/11 electronic surveillance and the military-industrial complex, given life by cartoonist Khalil, seamlessly joins autobiography, investigative journalism, interviews and opinion into an engaging and digestibly chronological narrative.

Possibly the most enjoyable aspect of Verax (one of Edward Snowden’s codenames, Latin for “truth teller”) is investigative journalist Chatterjee’s autobiographical and self-reflexive POV; as with the work of Joe Sacco or Nick Broomfield, his successes and failings form an ongoing background story. Chatterjee’s reports on the death toll of drone strikes in Pakistan and Yemen drew the attention of Assange, and saw him invited to disseminate Wikileaks’ initial document dump. This fuelled the narrator’s globe-spanning “adventure” in search of the truth behind the USA’s private defence contractors, which consequently saw him released from the Bureau of Investigative Journalism due to his research failing to uncover anything that might prove marketable. Chatterjee’s account is a captivating one in that he’s constantly on the sidelines, his own timeline interjecting and paralleling the main events. His resolve to join the dots takes him from business expos where companies flog the latest hacking tools as though they were gaming consoles to nigh-on blacklisted filmmaker Laura Poitras and eventually Glenn Greenwald. Discussions with former drone operators suffering PTSD highlight the startlingly high error rate that comes as a result of poorly collated metadata and remote, under-informed staff. There’s also a wonderful extended conversation with artist Khalil later in the book, which shrewdly embroiders the creative process into the overall message and ultimately lends the book the tone of a memoir.

I’ve read several criticisms of the book as one-sided, and Chatterjee (Halliburton’s Army: How a Well-Connected Texas Oil Company Revolutionized the Way America Makes War) clearly has an agenda here. He’s not interested in showing Assange or Snowden as anything but heroes, or considering the disputable benefits of tightened surveillance and clandestine activity. Given the unjustified death toll caused by US drones acting on incorrect data and the horrifying ramifications of such technology both expanding and tightening its grip on the western world, I’m personally not sure he really needs to, but his narrative might have benefitted from the smallest attempt at impartiality. After all, it’s the very same “us versus them” mentality – and, ironically, a typically comic book sense of morality – the book perpetuates that has enabled such indiscriminate violence on the Middle East to continue out of sight and mind.

Trump’s inauguration is covered, and his administration’s strengthening of mass surveillance and drone warfare is rightfully condemned, but at this point Chatterjee’s narrative is quick to forget Obama’s earlier sanctioning of the drones and broken promises regarding the Patriot Act. The book also conveniently stops reporting on Assange’s recent years in the media, which have raised alarms amongst even the most ardent supporters of those 2011 leaks. However, this unevenness didn’t dull my enjoyment of the book whatsoever, and Verax is fascinating and charming throughout, a clusterfuck of facts and ideas too unbelievable to be fictitious. Khalil’s art takes on a style and format that readers of similar books have come to expect, but he treads that fine line between rendering events and personalities’ as realistic yet distinct (Chatterjee is so wiry that he’s virtually insect-like) as only a veteran artist can. The latter chapters of the book take on a more fluid approach to storytelling; Khalil pulls out all the stops to take us through Chatterjee’s explanation of the four elements of government surveillance (tracking, hacking, mass surveillance and analysis) with an inventiveness that emphasises just how flexible and suited to non-fiction the medium is.

I received a review copy of Verax a week before Christmas, that festival of unending cheer and unquestionable happiness (and in my case, flu), and found myself unable to read through much of the book until the tinsel had been neatly boxed away and I was once again primed for stark reality. This isn’t a criticism of the book, far from it. Chatterjee and Khalil have expertly condensed an array of complex, conflicted and contradictory topics into a concise and linear narrative, and indeed a very entertaining one, yet the book’s subject matter still makes for a constantly uneasy read.

For more on Verax, visit www.veraxcomic.net.