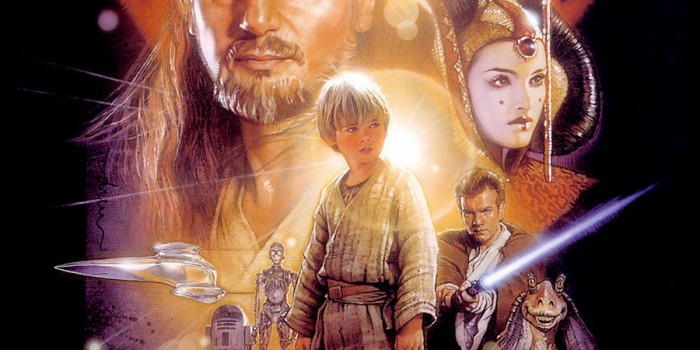 Welcome to the first instalment of Rose-tinted, in which I work my way through a series or franchise from beginning to end, like the diligent geek and borderline obsessive compulsive that I am, and re-evaluate it from an older and even bitterer perspective. Don’t cry for me, I’m already dead.

Seeing as I spend much of my blog-time writing about new and upcoming indie releases, I thought it’d be a refreshing change to write about something a bit more established. I was planning on revisiting the Classic Doctor Who DVD’s in chronological order, but decided to first revisit the Star Wars saga before the release of Episode VII: The Force Awakens… because, clearly, nobody else on the internet is doing this sort of thing.

The Beginning of the End

First up is the almost universally maligned Star Wars Episode I: The Phantom Menace.

Before I start, I’d like to get a few things out of the way:

Despite its reputation, The Phantom Menace is by far the most “Star Wars” of the prequels, and John Williams score immediately throws you back into that “a galaxy far far away…” The tone is mostly spot on, excluding the cartoonish Gungan scenes, and it is indeed devoid of the humour that made the originals infinitely watchable.

I still feel that Episode I is a decent introduction to what is, though its fans would want you to believe otherwise, a series of family-oriented fantasy movies. Not children’s movies, no sir, but family movies. It’s simplistic and dumb in places, sure, but so is A New Hope.

This was the first time I’d seen Episode I on Blu-ray, and possibly on a decent sized screen outside of the cinema, and I was blown away by the amount of effort that went into the movie’s locales and background characters. The Phantom Menace‘s plot may be convoluted drivel, but there’s no denying the level of affection that went into the world building and character, creature and vehicle designs. Coruscant looks every bit as magnificent as it’s supposed to, and the dogfight at the end holds up better than I’d expected.

Jar Jar Binks is every bit as loathsome as I remember

Yup, he really is. It’s been a decade since I last saw The Phantom Menace, and I had hoped that time would prove kind to the infernal Gungan git. But no, he’s as irritating as ever, and Lucas’s unabashed love for his ridiculous CGI creation manages to drain every scene he’s in of atmosphere, suspense or pathos. Oh look, while his fellow Gungans are being slaughtered around him, the hilarious Binks has his foot tangled up in a battle droid’s entrails! Ugh…

The key alteration to the Blu-ray edition of The Phantom Menace is the CGI Yoda, which replaces the younger Yoda puppet that managed to not only be fucking creepy but look nothing like older Yoda. It’s hardly a game changer, but I felt that the lil’ green guy’s scenes worked better in this version.

For some reason I don’t remember the battle droids having paint jobs to indicate rank or role, a motif the clone troopers would later adopt, though as I can’t find anything verifying such an amendment it’s probably just the dementia taking its toll.

The podrace bogs the entire movie down

There are plenty of Phantom Menace fan edits out there, and all seem to omit or reduce at least two things: Jar Jar Binks and the podrace seen. The latter is, much like the dinosaur stamped in Peter Jackson’s King Kong, the epitome of self-indulgent filmmaking, and you have to wonder why a producer couldn’t have stood in and said “no, George, it doesn’t need to be there”. I understand that it demonstrates Anakin’s piloting skills and intuitive mastery of the force, but it’s far too long, and the events preceding it are contrived. Without it, the movie would feel far less bloated.

Almost every actor to appear in the prequels has a sort of lost, dead-eyed look about them, as if they can’t quite convince themselves of their character’s next woeful line of dialogue. But Liam Neeson just about survives the experience unscathed. Qui-Gon Jinn is by far the most engaging character in the film, and much like Game of Thrones’ Eddard Stark he acts as our guide to this fantasy world as well as embodying said world’s traditions that are about to be burnt to the ground. Qui-Gon’s attitude to the Jedi Council is also refreshing, as do they seem to lounge about doing sod all. It’s difficult to imagine the Clone Wars unfolding as it did had he bested Darth Maul.

That lightsaber battle, though

Darth Maul is the beginning of a long line of cool-looking but ultimately useless villains, but boy can that red devil twirl his glow stick. The three-way lightsaber battle at the end of the movie is the one element that even the movie’s biggest detractors seem to respect. It’s just a shame that the fight is juxtaposed with Jake Lloyd shouting “yippee” and Jar Jar Binks being a twat.

Duel of the Fates

If Lucas needed someone to reign him in during the writing and production of The Phantom Menace, John Williams is as reliably brilliant as ever. Duel of the Fates is an epic addition to the overall Star Wars soundtrack that sounds both familiar and new, and shows an artist at the top of his game.

If there’s one constant throughout the Star Wars prequels, it’s that while every major actor seems lost in a sea of green screen, Ian McDermid is having a ball hamming it up to eleven. I love the way The Phantom Menace doesn’t telegraph that he’s the bad guy. Okay, it’s blatant if you’ve either seen the original movies or managed to pay attention, but the “casuals” I first saw the movie with had no idea that Palpatine, the hooded holographic villain and the Emperor from Return of the Jedi were one and the same. For all the slack this movie gets for its trade embargoes and impenetrable political machinations, Palpatine’s rise to power is arguably the one subplot handled deftly throughout the prequels. I enjoyed Star Wars Episode I: The Phantom Menace far more than I’d anticipated, mostly because I’d braced for the worst, but also because when you strip it of its reputation there’s a lot to like. It’s epic, amateurish, charming, tacky, inspired or bland depending on the scene, and often all at once, but its moments are amongst the series’ highlights. Next up, however, is Attack of the Clones, quite possibly the only Star Wars movie I’ve had few kind words for.