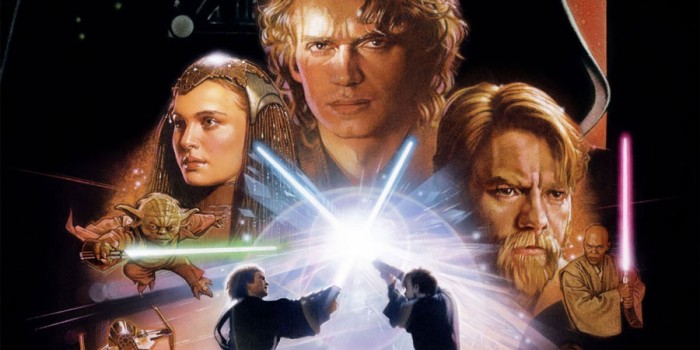 This is Rose-tinted, in which I work my way through a series or franchise from beginning to end, like the diligent geek and borderline obsessive compulsive that I am, and re-evaluate it from an older and even bitterer perspective. Don’t cry for me, I’m already dead.

Revisiting the Star Wars prequels, I found myself enjoying parts of The Phantom Menace more than I could have possibly anticipated, while three quarters of Attack of the Clones left me feeling irreparably hollow. On to Star Wars Episode III: Revenge of the Sith, then, generally considered the “least worst” of the prequel movies, and the one that for many viewers went some way to, if not redeeming the prequels, then tying everything together as neatly as could be expected.

Or conversely, as a friend of mine once described it, “like the fucking muppet show.”

Yes, this is the movie that sees Anakin’s downfall and transformation from whiny honourable Jedi into a lil’ old Dark Lord of the Sith called Darth Vader. Much of Sith’s third act serves as a bridge between the two trilogies, and plays on our fondness for such iconic interiors as the rebel blockade runner and super star destroyer. And that’s no bad thing.

I suspect that much of the relaxed attitude towards Revenge of the Sith comes from the ship and tech design, which also acts as a bridge to the original trilogy. The clone troopers pilot ships that look like the precursor to the X-wing, and the walkers on Kashyyyk clearly resemble the AT-AT and AT-ST. I’ve always argued that regardless of their acting and writing deficiencies the prequels are a showcase for brilliant design and visual storytelling, and the confidence with which Lucas and his production team repeat motifs, scenarios and icons throughout the series is something I’ve always been in awe of.

The lightsaber fight choreography is terrible

Even the most fervent opponents of The Phantom Menace tend to agree that the film’s climatic lightsaber battle is a high point of the series, and while Attack of the Clones doesn’t have anything that matches Darth Maul, its final act is still engaging, as is the scuffle between Obi-wan Kenobi and Jango Fett.

In Revenge of the Sith, however, the fights are giving all the attention of a fan movie. Three elite, highly trained members of the Jedi counsel seemingly drop their guard and allow Darth Sidious to dispatch them, while on the molten planet Mustafar, due to poor editing Anakin appears to run head first into Obi-wan’s foot.

The lightsaber battle that never ends

I get it, we’ve been waiting for three movie to see Obi-wan and Anakin fall out, but the final confrontation never seems to reach a climax. Sequences of choreographed moves are reused, while the molten material that sprays the duellists is pushes the viewer’s suspension of disbelief too far even for this series. He was so menacing in the brilliant Genndy Tartakovsky Clone Wars animated series, wasn’t he? I remember being thrilled by the initial images of Grievous, but taken back at how… avian he appeared in the actual movie. Grievous isn’t a terrible villain, to be fair, just a superficial one, which is pretty much a Star Wars tradition; though at least this time his inconsequence is an intentional part of the plot.

Okay, he’s not, but Palpatine’s rise to power is definitely the most interesting element of the prequel trilogy. I’ll argue to my grave that the prequels’ political subplot is the one element that qualifies them as science fiction analogy, as opposed to pure fantasy, even if its execution is often clumsy and fatally dull.

Palpatine’s Darth Plagueis speech is one of the few moments in the entire series of seven movies that slows down long enough to provide us some background and fascinating insight into the mythology surrounding these characters. Ian McDiarmid is hilariously over the top, licking his lips and cackling like the villain from an 80s toy commercial. Yes, Palpatine’s big reveal is the stuff of pantomime, but fittingly so, and as I’ve said in previous entries he’s the only actor who looks like he’s having a good time. The Star Wars prequels are a bit like that one dull, dim-witted friend we all keep in our social circle. Yes, you moan about them a bit too much when they’re not around, only to defend them to the end if anyone else says anything minutely derogative about them.

Fans have spent the past decade evaluating these films, and will probably waste several more bickering over the movies pros’ and cons, or even whether they should be erased from canon; a ludicrous suggestion, but there you go. Objectively, there’s a lot to love (the sound and visual design, Williams’ score, the world-building) and enough to hate (acting, primary characters, overuse of green-screen), but I’m sure that before Episode VIII hits the cinema I’ll revisit these three reviled movies and once again find new things to both enjoy and feel exasperated by.

Expectation versus reality versus nostalgia. That’s essentially Star Wars in a nutshell.