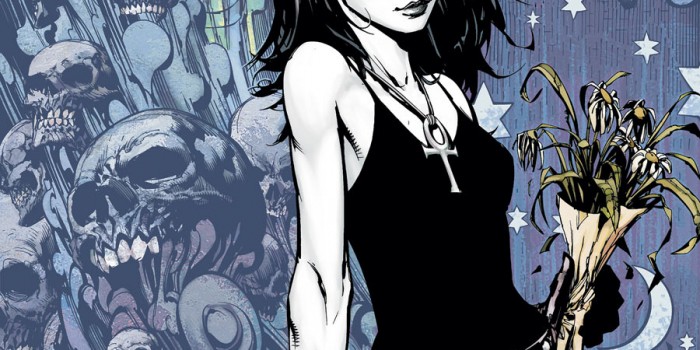 Yup, it’s part 5 of ‘The Black Ring’, which shall forever more be referred to as ‘that issue of Superman with Death in it’.

I’m not quite sure why it’s so jarring to see Neil Gaiman’s Goth-girl incarnation of Death chatting with Lex Luthor. Early issues of The Sandman featured several DC mainstays, and Dream appeared in JLA a while back, but Luthor’s brief trip to the afterlife finally cements The Endless’ place (back) in regular DC continuity. Other than the aforementioned guest appearance there’s not an awful lot to say about this issue. Paul Cornell always writes decent dialogue, but the engaging exchange between a firmly atheistic Lex and the cutest Death there ever was doesn’t really go anywhere. True to character, Luthor’s encounter with the Grim Reaper doesn’t appear to have humbled him in any way, and we’ll have to wait until next issue to see whether it brings about any degree of catharsis – or, perhaps, the complete opposite.

Still, this issue did work as further indication that superhero comics don’t need to descend into mindless violence every dozen pages or so to be entertaining. Pete Woods draws a rather delicious Death, and her flippant allusions to Blackest Night are a nice touch, almost providing a comical acknowledgement of how far that particular event outstayed its welcome. The Jimmy Olsen second feature by Nick Spencer and RB Silva is also a lot of wacky fun, and the perfect antidote to Luthor’s po-faced delusions of grandeur.