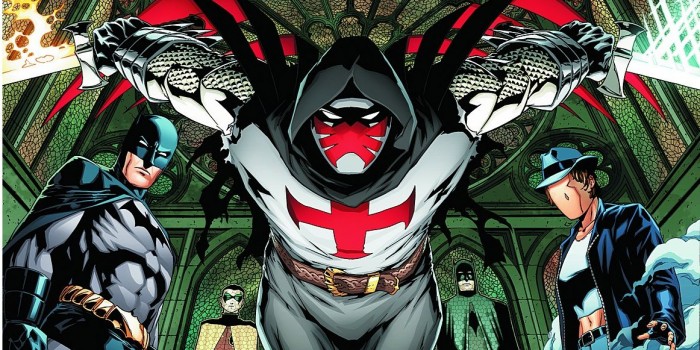 Reaction to the Batman Reborn event has definitely been a surprise. Not in the sense that it has sold copies (that was a given) but how quickly fans have warmed to the Dick Grayson and Damien duo. Jean-Paul Valley cyber-Bat never received such a warm welcome.

Naturally, the success of the new Batman has been in the quality of storytelling DC has delivered so far. The regular Batman series, Morrison’s Batman and Robin and Streets of Gotham have yet to produce a classic Batman tale between them, but have all proven worthwhile titles. This annual happens to be the first unfortunate slip in Dick Grayson’s reinterpretation of the Bat; neither of the two tales (both concluding in the upcoming the Detective Comics annual) within are terrible, just examples of comic book storytelling at its most conventional. The central two-part story, ‘The Eighth Deadly Sin,’ is clearly intended to bring Azrael back into the fold. Written by Fabian Nicieza, who will be carrying the character into a new ongoing series, it’s an average entry which mixes some decent detective scenes with Harvey Bullock, some brief moments with the new Azrael and introduces the villain Amon; a religious fanatic with a mechanical tail.

The story begins with our various sleuths investigating the murder of a priest and desecration of a nearby tombstone, but Grayon’s method of working with the Gotham Police Force to catch the murderer (after he subsequently attempts to abduct a related boy) is so ludicrous that it practically undoes the rest of the plot. Basically, Dick and Damien go undercover as a chauffeur and the intended kidnap victim. Bruce Wayne has done similar things in the past (as did Sherlock Holmes) but rarely has he announced it publicly. Having Dick chatting with the detectives with no more than a dodgy grey wig/beard combo is not only ridiculous, but feels out of sync with the Batman entity, regardless of the man behind the costume.

Nevertheless, there are some enjoyable moments here; and while J. Calafiore struggles with the more static moments he certainly illustrates action with panache. The new agent under Azrael’s suit of sorrows – Michael Lane, formally the third “Ghost of Gotham” – also gets a rather promising introduction here, and appears to be carrying on the work of the Order of Dumas/Purity in a similar vein to Valley. And if the final page is anything to go by, Amon’s plans are far more interesting than the set-up here suggests.

Part one of ‘Darker than Black,’ however, is a waste of paper. The art by Kelly Jones is simply not of a professional standard, while McMurray struggles to the first half of his plot, which involves Oracle’s hunt for a vampire who leaves bloody Rorschach clues behind, into a mere 9 pages.