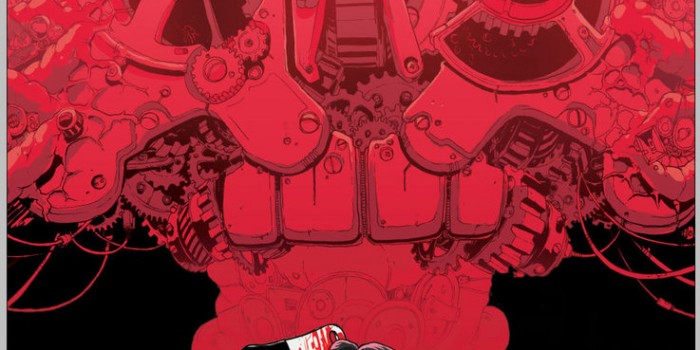 The trouble with surrealist storytellers such as Robert Crumb and David Lynch is that they make their own brand of weird look so easy. One thing their legions of imitators often overlook is that their approaches are entirely natural; it’s impossible to imagine post-80s Lynch making anything but films like INLAND EMPIRE.

Kill Audio, the creation of Coheed and Cambira frontman Claudio Sanchez (The Amory Wars) falls into the category of being weird for the sake of being weird. It’s certainly imaginative, and not like anything else I’ve ever read. Yet the plot, if the book ever actually adheres to one, is so completely incomprehensible that it’s difficult to invest in any part of it. The series follows the titular Kill Audio, a hairy immortal man/thing who is searching for Clockwork, the Keeper of Sight & Sound. On the way he teams up with coke-snorting chicken Chi-Co, sentient sackboy DJ and Beav, whose appearance is best described as the Grim Reaper in a beaver costume. Oh, and on several occasions Kill Audio is murdered by a psychopathic robot called Fix-ler. Quite why any of this happens is beyond me; though fans of Sanchez’ other work will likely enjoy its sheer irreverence.

As hollow as the story may be, Mr. Sheldon’s art is oozing with layers of humour, obscenity and such vivacity that it’s hard to pinpoint exactly who his influences might be. His warped character designs hark back to the Comix movement, yet the book’s black/white/red colour scheme and kinetic inks regularly resemble graffiti. Sheldon’s inimitable art is the reason this book works at all.

I struggled to get to the end of this first issue, and dare say that I will not attempt to read the second, but that’s not to say that I don’t have a certain level of appreciation for Kill Audio; there truly is nothing else like it on the shelves. In a climate where publishers are preoccupied with producing the next big film adaptation, that such a bizarre and original series can still find its way into print is undoubtedly a good thing. Though quite who the audience for this oddity might be beyond Coheed and Cambria fans, I have no idea.