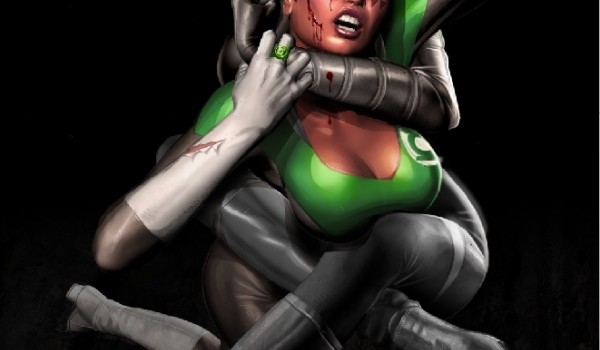 While Blackest Night has been pretty consistent, the rise of almost every fallen hero into the ranks of the undead appears to be reaching its point of exhaustion. Whereas Sinestro was a fascinating villain, wily and unpredictable, the Black Lanterns are simply a relentless plague of death and destruction. Naturally, this makes them a formidable force of opposition for the Green Lantern Corps, but it also robs the event of suspense or intrigue.

Not that ‘Heart of Darkness’ was a bad issue by any means, but it’s far from the first time that I’ve felt Blackest Night’s presence hitting the same notes again and again. Arisia fights her dead family, Kyle Rayner endures his deceased girlfriend’s allure, Kilowog confronts his reanimated drill instructor, and so on… Fortunately, Peter J. Tomasi is doing such a great job with this series that it’s easy to forgive Blackest Night’s monotony. Quite how he manages to juggle so many leads so effectively is beyond me. Team books often fail because writers struggle with too many characters (the various X-titles) or feel the need to persistently throw in character-building issues that slow events to a crawl when read on a monthly basis– as Brian Michael Bendis has been doing with New Avengers. Alongside Jeff Parker, Tomasi is one of the few writers capable of telling his stories entirely through action without the motivations behind each confrontation coming across as contrived. The fate of Sodam Yat, currently residing in the centre of Daxam’s sun, is still unresolved. Sure, he’s supposedly dead – or as supposedly dead as anyone gets in superhero comics – but if Geoff John’s recent Legion of 3 Worlds miniseries is anything to go by, Yat is bound to make a comeback.

Patrick Gleason’s excellent art is let down by some incompatible inking, but Randy Mayor and Gabe Eltaeb’s stunning colour work maintain a reasonable level of cohesion. Green Lantern Corps is still one of the most riveting series currently on the shelf, and the emergence of flesh-hungry Black Lantern kiddies was quite possibly the most disturbing moment of Blackest Night so far; and that’s saying something.