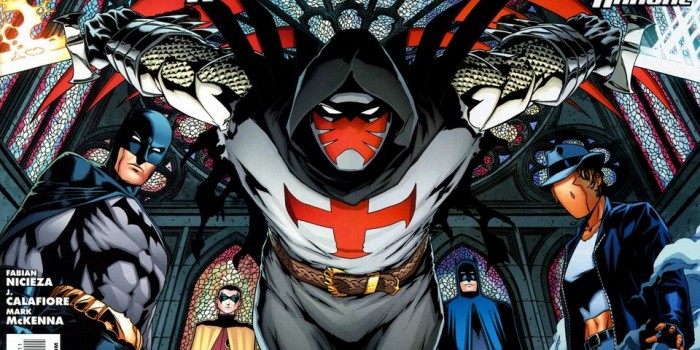 While the first part of Fabien Nicieza’s Azrael story ‘The Eighth Deadly Sin’ was pretty underwhelming, it’s nice to see this conclusion improve on it considerably. This is mainly due to the appearance of the Question, a character who has sadly been relegated to the Detective Comics second feature. Renee Montoya’s faceless sleuth is a far more fascinating entity that Azrael will ever be, and her discourse with Batman is not only excellently written, but might hopefully spark a closer affiliation between the two. In the last pages of Batman Annual 27 it was revealed that Amon was acting on behalf of a cult, with each member representing one of the seven deadly sins. La Saligia aren’t quite as interesting as they might have been, though they do present the new Boy Wonder an opportunity to prove himself as a solitary force. But for a story that was conceived as an introduction to the new regular Azrael series, Michael Lane’s version of the vigilante doesn’t really have much of an impact; and with so many Bat-titles currently hitting the shelves he really needs to.

Tom Mandrake’s art isn’t as enjoyable as J. Calafiore’s was on the Batman Annual. Not that his illustrations aren’t decent in their own right, but his inking varies greatly in consistency. Several of his pages look as though they were inked by entirely different artists. The accompanying tale ‘Darker than Black’ ends in as lacklustre a fashion as it started, with Oracle calling on ex-Outsider Looker to investigate the vampire serial killer. Barbara Gordon worked so effectively as part of a team, but without her Birds of Prey cohorts her lack of mobility does limit storytelling potential. Like the Question, she’s another appealing character crying out for a decent writer and a worthwhile series.