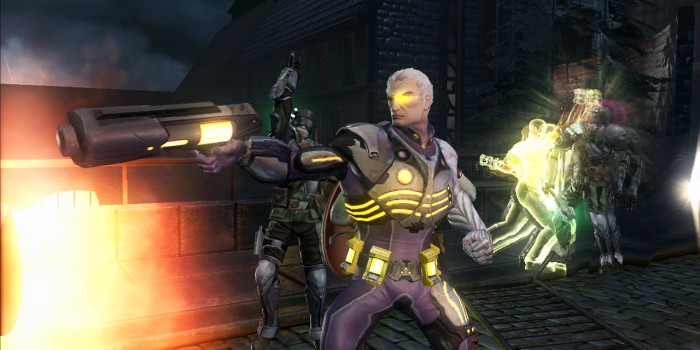 Ultimate Alliance 2, the latest in Activision’s series of button–bashing Marvel “RPG ‘em ups,” would make for a very interesting study on the change in brain activity over the course of a game. Its single player story mode is capable of invoking such incredibly contrasting responses, ranging from delight to apathy, that it’s almost impossible to summarise in any concise way. So, instead of reviewing the game in a systematic manner, I’ve decided to describe what gamers will get from the game in the first 8 hours or so:

Your first hour with Ultimate Alliance 2 is likely to be a compelling one. From the exhilarating cinematics to the splendid in-game graphics that manage to feel immersive despite the top-down perspective, it’s a polished package that has clearly been crafted with comic fans in mind. You’ll hop between playing Captain America, Iron Man, Spider-Man, and Wolverine, as they follow Nick Fury through an attack on Castle Doom, Latveria. Each character feels significantly different; Cap’s shield is controllable while airborne, Spidey is super-agile, Stark is the powerhouse and Logan’s best used in an up-close-and-personal capacity. Comic readers will recognise the ensuing events from the Secret War storyline, and it’s wonderful to see such a plot used in favour of the customary Hollywood movie spin-off. 2-3 hours in, and you’ll suddenly find yourself swamped with a plethora of things to do. Fan favourite characters and plenty more appear to be accessible, but most are still locked out, thus giving you an incentive to keep on playing. After all, who doesn’t want to play as the Hulk or Gambit? Experience points unlock various abilities, providing new angles from which to direct your existing characters. As the events of Secret War begin to foreshadow a superhero Civil War, Ultimate Alliance 2 features so many cameos and tidbits of information that you can’t wait to explore the universe further. You’ll soon be forced to choose a side, gathering heroes to your cause and not only battling such lesser-known enemies as Grim Reaper and Tinkerer but your former friends. There’s even a quiz to challenge your knowledge of the Marvel Universe.

4-5 hours. Your interest will begin to wane considerably, as you’ve accessed characters such as Daredevil and Iron Fist… only to find them almost identical to other existing heroes. The characters are extremely unbalanced; Jean Grey is near useless, while Hulk, Thor, Iron Man and Wolverine are so powerful that you’ll only feel the need to switch characters in order to unlock their second costumes. By now you’ll have switched your character customisation to auto, as hopping back into a stat menu every other minute becomes increasingly irritating. 6-7 hours. The game is struggling to maintain your interest. Every level is identical but for slightly different visuals, and each location seems to house the same barrels and crates regardless of whether you’re in an underground laboratory or the jungles of Wakanda. You’ve been subjected to the same dozen once enjoyable one-liners so many times now that the mute button is looking more and more tempting – there’s only so many times Deadpool can break the fourth wall before it ceases to be funny. The storyline is no longer proving interesting either; after meeting up on several occasions to grapple without consequence, our pro- anti-registration heroes are once again fighting on the same side.

8 hours plus. You are now on your way to completing the roster, but have yet to unlock the Green Goblin or Venom. A gut feeling suggests that they will play identically to everyone else. And as you sit there, hammering mindlessly at identical foes with the same two moves, a sense of purposeless fills you, and it suddenly becomes difficult to continue playing… Okay, so that went off course a little. But the point is that Marvel: Ultimate Alliance 2 does nothing to sustain its audiences’ attention. There’s fun to be had here, but it’s a thoroughly repetitive experience that, beyond an aesthetic overhaul, makes absolutely no effort to improve upon its predecessors. Including X-Men Legends and its sequel, Ultimate Alliance 2 is essentially the fourth game in the series, yet aside from the graphical overhaul developer Vicarious Visions have made little effort to change the increasingly tired formula. The new fusion system, which allows two heroes to combine powers, can produce some visually impressive results, but with few exceptions each partnership creates damage in one of three similar fashions.

Ultimate Alliance 2 is set around the events of the Civil War crossover, though it also includes Nick Fury’s covert op from Secret Wars. For those not in the know, Civil War saw the Marvel’s finest either opposing or supporting a Superhero Registration Act that forced all costumed vigilantes to register with the American government after a televised battle between the New Warriors and Nitro destroys a nearby elementary school. The Marvel licence is used extremely well, and it’s great to see members of the Young Avengers and Thunderbolts making their videogame debuts. Even fan favourites such as Multiple Man, She-hulk and Cable make NPC appearances.

The problem is that anyone invested in the Marvel Universe enough to forgive the mindless button-bashing is likely to be familiar with the Civil War storyline, and while the plot here occasionally deviates from the source it will only feel fresh to those unfamiliar with the comics. Behind the comic storyline’s feuds were many smaller struggles that gave the registration debate resonance, and by simplifying these to a series of larger group battles the game’s plot loses all focus, seemingly persisting only to fuel the next set of hero-on-hero confrontations.

One vast improvement, however, is the online/offline co-operative play. Players can now seamlessly drop in or out of an existing game, and characters can be levelled up via a pop-up menu to prevent interrupted gameplay. It’s a lot of fun, so much in fact that you might just overlook Ultimate Alliance 2’s every other deficiency.

Marvel: Ultimate Alliance 2 isn’t a great game, but an average game with a great use of Marvel’s intellectual properties. Vicarious Visions have forged an experience that is crammed with unlockable extras and interesting factoids, even if it does not to improve upon its equally monotonous predecessors.

If top-down slugfests are your thing, the game’s got a lot of replay value, with the branching story providing a different experience depending on your decisions. But the retelling of the Civil War event lacks any clout, and as a result Ultimate Alliance 2 is vibrant, mindless fun best enjoyed with a few drunk friends.