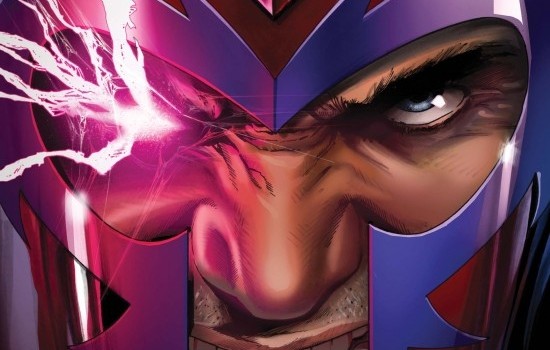 Magneto’s back, and he’s more civil than ever before! Perhaps the biggest surprise with this issue was the way in which Matt Fraction handles the X-Men’s most formidable foe’s return. Not with a world-threatening bang, but with as understated an entrance as could possibly have been predicted. Whether Magnus will remain well behaved is another matter altogether, but just two issues into the Nation X arc I’m more intrigued by the title than I’ve been in a long time.

As with Dark Avengers, half of the Nation X plot’s hook lies in anticipating how Cyclops’ new empire will crumble. Emma Frost’s warning that by gathering the mutant community into one place he’s only made them easier to hunt and kill is likely to foreshadow this story for some time. Since the Dark Avengers/X-Men ‘Utopia’ crossover finished, Matt Fraction has been able to ease the pace and develop his characters a bit, even if his characterisation is still off in some areas. Scott Summer’s slow determination as he struggles to fully realise his hastily executed plan is handled adeptly, but I do have a problem with Fraction’s use of Xavier as an eruptive detractor who is happy to persistently criticise Cyclops without making any effort to oppose him. The X-Men’s altruistic mentor deserves much better.

We also discover what Lobe and his posse have in store for the captured Scalphunter. Unfortunately, it’s the usual unimaginative C-list villain scheme that will throw this series back into the action-packed monotony that it so often enjoys. It’s disappointing to see Uncanny slowly getting back on its feet again only to be aware that next issue will almost certainly descend into the sort of overpopulated skirmish X-Men readers have already suffered a hundred times over.

Greg Land’s work on this series has always been of a superior quality, but Leiston’s inks and Ponsor’s colours are really making his art shine. If nothing else Uncanny provides sumptuous eye candy, but Fraction really needs to reread some old X-issues from the 70s and 80s. Y’know, back when each character had his/her own distinct voice, and the stories were great.