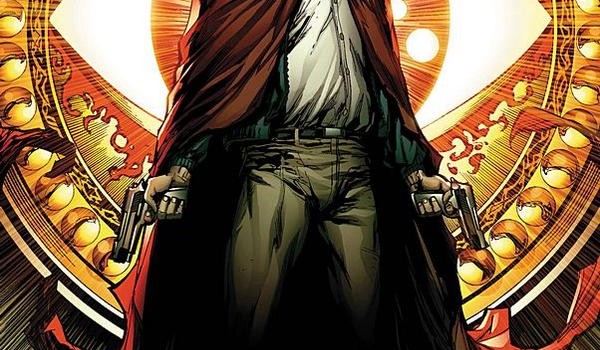 Ever since New Avengers started back in 2005 I’ve generally felt a bit apathetic towards the title. Brain Michael Bendis just doesn’t do Marvel’s team books as well as his more personal labours such as Jinx, Alias, Powers or Daredevil and the series has been so aggressively shaken up with every major event since its release that it seems to change direction with every story arc.

Dark Reign appears to have injected some much need life into the team, and since #48 we’ve had the slightly new line-up, a baby-thieving Skrull Jarvis, Luke Cage’s deal with Norman Osborn and a battle with the Hood and his goons keeping things galloping along at such a pace that the weeks in-between each issue have dragged in comparison. Sadly, that momentum hit a brick wall last month. Brian Bendis loves to write confined conversations – who can blame him when he does them so well? – and three of those is essentially all we got. Issue #51 doesn’t up the ante either. With Doctor Strange no longer the Sorcerer Supreme, he’s only narrowly escaped an attack from the Hood, who is being manipulated by the demon Dormammu. Marvel clearly has big plans for the Hood, and I did enjoy Ronin’s coy remark that he’s everywhere at the moment. The guy seems to have appeared in more Dark Reign tie-ins than Norman Osborn.

There’s now the mystery as to who might take Strange’s place. Bendis loves to perpetually tease us, and last issue’s cover flaunted a list of potentials, including Doctor Doom, Ghost Rider and Daimon Hellstrom, who also makes a brief appearance here. Giving Dark Reign’s villain-centric premise it would make sense if Strange’s powers were to fall into reckless hands.

Multiple pencilers working on the same issue isn’t something that bothers me as long as there’s a consistent style or colourist involved, but the last few issues of New Avengers have had absolutely no visual cohesion, with the art shifting drastically from one page to the next. The talents involved are all gifted artists, but such incongruity really prevents me from getting at all immersed in a book.

Last month’s deliberate pace was justifiable as breathing space between #50’s gripping double-sized special and this Sorcerer Supreme plot. Bendis has spent another 23 pages this month portending to grand events, but little of consequence has actually happened. This leisurely approach would be fine if the funny books were cheaper, but they’re not.