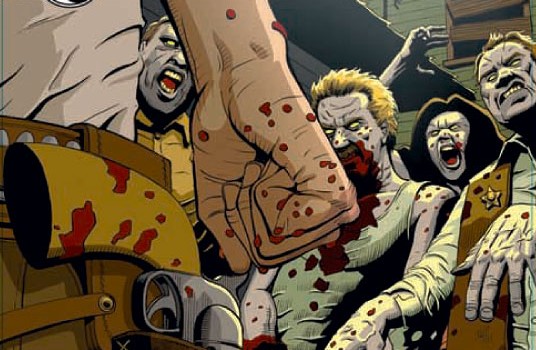 One of the difficulties in reviewing comic books by the issue rather than in graphic novel format is that modern comic plots often take so long to reach their momentum. Writers such as Brian Michael Bendis often favour issue-long dialogue driven scenes that read well in trade paperbacks but aren’t entirety satisfying when consumed on a monthly basis.

Thankfully this doesn’t apply to the premier issue of Rotten, a hefty book at double the page count (and price) of your average debut. It’s a good job too, as were you to read just the first half of this issue you’d be hard pressed to find a motive to buy the second. Fortunately, by the end of this 52pg behemoth, you’ll likely be anticipating the next chapter in Moonstone’s well executed, if not entirely original, zombie Western. That’s right, those cannibalistic corpses are up to all sorts of shuffling shenanigans in the Wild West, 1877. When Government agent William Wade rides into town in search of his missing partner, he’s hardly given a warm reception by the residents of Shimmer; and there’s definitely something rotten going down in the nearby Lucky Draw silver mines.

There’s clearly more happening than would initially seem here, and though Wade’s business in Shimmer is over pretty swiftly, the presence of mysterious stranger Aubrey and the promise of other outbreaks and “different species of the wretched things” make ‘Reactivated’ feel like the pilot episode of a TV series. Kung Fu with zombies, if you like. And it’s a good pilot too, with credible characters and spirited dialogue by Horton and Rahner and suitably coarse art by Dan Dougherty.