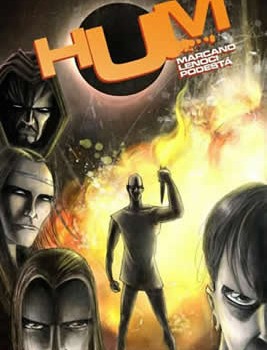 In one of Warren Ellis’s wonderful column series ‘Come in Alone,’ he comments astutely on the great irony of Image Comics and the exodus of talent by MacFarlane, Lee, Liefeld, Valentino, Silvestri and co. from Marvel and DC to their own creative landscape. A publisher where their imagination would no longer be hindered by a lust for big bucks and a fear of venturing outsides the comic medium’s established market. Of course, this creator-lead drive ultimately gave birth to Spawn, Shadowhawk, WILDCats, Cyberforce and (ugh) Youngblood; second-rate facsimiles of the mainstream titles those guys had fled from, betrayed not by a want for imagination or artistic ability but a complete lack of balls. So why am I rambling on about something completely unconnected from the book I’m supposed to be reviewing? Because Hum, the new book by screenwriter Scott “Diablo” Marcano and Tom Lenoci, and illustrated by Renzo Podesta, manages to succeed where so many independently published titles fail. These guys have crafted an intelligent tale that caters to the accustomed comic book science fiction and fantasy market without ever feeling complacent or uninspired. It’s a rich, unfeigned sci-fi tale that doesn’t attempt to grab your interest with colourful but shallow characters that feel as though they were designed solely with action figures and animated series in mind.

Hum take place on a distant three-mooned planet where an alien virus turned 80% of a human colony blind, dividing the population into sighted masters and blind slaves. When drug addict Vol infiltrates a village of blind former slaves, who have developed unique abilities to compensate for their disability, he is slowly and cautiously accepted by the group. But his arrival has also initiated an attack from the sighted majority led by his brother Rom, who wants to use the village’s disused drug supplies to fuel his new reign.

This is a difficult book to discuss without delving deeper and stumbling into spoiler territory. Probably the most impressive thing about Hum is how Marcano and Lenoci introduce their cast without forcing explanation or back-story upon us. Many of the locations and plot devices remain unnamed, and the Marcano and company depict is one that isn’t burgeoned by techno-babble or the need to slap industrial innovation on every page. The book’s pacing feels effortless; the script never forces the specifics of this universe upon us, but rather allows its characters to speak for themselves. Vol’s dreams fill in the gaps at regular points, and though you’ll be confused for much of Hum’s first act you’ll never be bored.

Unsurprising as Marcano has worked in films for years, Hum reads very much like a film script; he and Podesta use dialogue sparingly, never undermining the pace with an unnecessary narrator. There are some great ideas present; the village punishes its criminals by refusing to acknowledge that they exist, while Vol’s eyesight is viewed (no pun intended) by the blind as an impairment. I felt that Vol’s manipulative, twisted brother Rom could perhaps have been expanded upon; compared alongside the rest of the superbly realised cast he almost fits into the two-dimensional villain role a little bit too willingly.

Renzo Podesta’s art is striking, and though he was clearly on a strict schedule his economically stylised character designs possess a distinctively jagged quality. His work often has a texture to it, showcased in the impressive colour scenes which represent Vol’s drug-induced dream state.

Never does Hum feel like a routine introduction to a “bigger, better” sequel, as similar works might, but a visual and cerebral experience that is hard to compare to any other work in the comic medium. The book’s conclusion is especially memorable, wrapping up all of the story’s themes without leaving you feeling like it could have been handled in any other way.

Hum is schedule for release 29th July. For more details on the book, visit the MySpace page here.