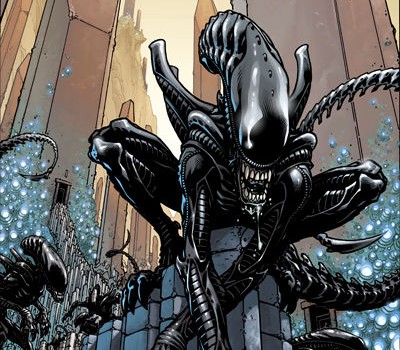 With Dark Horse currently compiling their back catalogue into rather neat Omnibus editions, it’s surprising how well many of the early Aliens, Predator and Terminator miniseries still read. Naturally, there were only so many directions these franchises could be taken before the ideas were worn a little thin, but time heals all wounds, or at least makes us forget the worst of them, and Dark Horse is at it again. Naturally, a Predator series is on its way for June. This new four part series from John Arcudi, simply titled Aliens, doesn’t deviate radically from those books or the film of the same title, but marks a welcome return to comics for the acid-pumping phallic extraterrestrials. There’s a brilliantly shocking plot development halfway through this first issue that really prevents me from discussing the plot in any way whatsoever. Needless to say, the series staples are all present and intact: a barren planet, imitation colonial marines, a research ship complete with ill-fated crew, and, erm, murderous hillbilly types. Surprisingly, bar the obligatory initial spot of violence that were this a movie would have played pre-credits, the Xenomorphs themselves remain portentously absent.

Arcudi does a good job of introducing his likeable if short-lived characters, but neither his writing nor Howard’s otherwise excellent art hit quite the right tone for this series. Alien and its sequels have always been known for their dark and gritty nature, while this book reads and looks more like Aliens: The Animated Series. Still, despite its peculiar vibrancy this series honours the venerable movie series, if not expanding on it in a remotely original way. Were you expecting anything more?