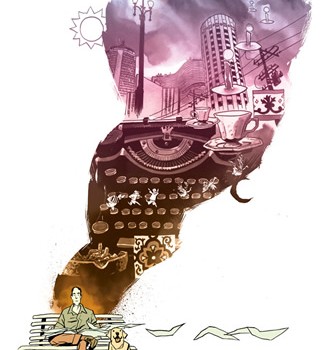 Eisner Award winning Brazilian duo Fabio Moon and Gabriel Bá’s new series Daytripper is a mature title in the truest sense. And by that I don’t mean that this is a comic that feels the need to shove tits and incest in the reader’s face to get a reaction, a la Vertigo’s recent Greek Street, or even that Daytripper reads as though it’s been marinated in the adolescent angst or philosophical ramblings of many other so-called “mature” titles. It’s not even a flashy first issue, instead unhurriedly introducing us to Brás, a bored obituary writer who’s long procrastinated more ambitious projects. And that’s about it. Only in the final pages does ‘32’ suggest where Daytripper might be heading, and what happens next is genuinely still anyone’s guess.

There’s a lovely sense of subtlety here, from Bras’ discourse with his dog Dante, to the manner in which the recently deceased play a part in his daily stream of consciousness. Fans of The Umbrella Academy or Ursula will be surprised quite how reserved the book’s art is, but there’s a superb sense of pacing on display here that lends clout to even the most (seemingly) insignificant scenes. Unlike most first issues, ‘32’ takes its time introducing us to its substantial protagonist. Often such an approach feels sluggish and directionless, but here I was captivated by the deliberate storytelling.

Some will pick up Daytripper #1 and reject this slow burning introduction to what looks to be a cracking series, dismissing it as a book where “nothing happens,” while others will hopefully appreciate it for just that. Like Sideways, A Serious Man and the very best Woody Allen movies, it’s likely to appeal largely to writers both professional and aspiring. Pretty much anyone who counts, then.