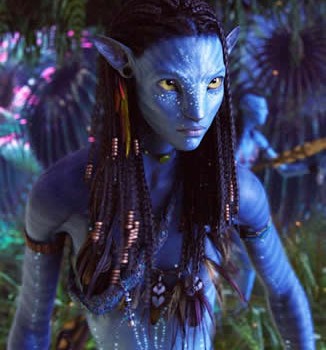 In 1986, James Cameron gave us Aliens, a movie which climaxed with Sigourney Weaver going head to head with a queen Xenomorph in a power lifter – despite the acid-spitting extra-terrestrial’s superior design it was clearly no match for human technology. Almost twenty-five years later, James Cameron’s Avatar has flipped this standard on its head. Now us money grabbing earthlings in our walking tanks are the bad guys, stripping the beautiful planet Pandora of life in order to mine its valuable resources. Oh how things have changed… Those who have balked at Avatar’s disappointing teaser trailer and eco-themed premise will be pleased to know that Cameron’s knack for subtlety is still non-existent. Avatar is a simplistic epic that both falls prey to the early “Dances with Wolves in space” dismissals while looking sure to change the minds of millions of naysayers. While Avatar doesn’t quite live up the hype preceding it – what movie possibly could? – that it survives such grand expectations unscathed is pretty incredible in itself.

When his twin brother is killed in a random mugging, disabled veteran Jake Sully (Worthington) is presented the opportunity to travel to the moon Pandora and take his place on an Avatar project, which allows him to remotely control a genetically engineered alien/human hybrid. The aliens in question are the tribal Na’vi: ten foot tall blue humanoids that share a symbiotic relationship with their planet.

While Pandora’s atmosphere is similar to Earth’s, its air is not breathable by human lungs, making the avatars the only method with which to study the Na’vi up close – the military forces on Earth want the valuable unobtainium that is under the Na’vi’s sacred Hometree, see. As Sully’s avatar is slowly accepted by the tree-dwellers, he quickly falls in love with Neytiri (Zoe Saldaña), which soon conflicts with his obligation to his own species.

You don’t have to be a Hollywood script surgeon to see where Avatar’s plot is heading; indeed the majority of the film’s problems stem from Cameron’s clumsily paced screenplay. While 20th Century Fox were willing to throw a rumoured $300mil on the project, it appears nobody had the guts to tell the self-proclaimed King of the World that his script needed some work. While the dialogue doesn’t quite reach Lucas’s depths of cringe-worthiness, several poorly defined characters and such horrendous sci-fi terms as “unobtainium” (the resource which humanity so desperately seeks) occasionally shake you out of what is an otherwise immersive experience.

But again, Cameron is no George Lucas. Whereas Lucas struggled to inject life into his CGI universe, resulting in unconvincing computer-generated characters and poorly staged battle sequences, Cameron’s skills as a director, if not writer, have adapted perfectly to Pandora’s virtual forests. For all its problems, Avatar truly delivers during its last 30 minutes, with a battle that is both epic and personal, and unlike the aforementioned Star Wars prequels, keeps track of its central characters despite its scale.

The human actors come second to Pandora itself, but there are some decent performances here. Sigourney Weaver’s botanist Grace is a Ripley for the green generation, while Sam Worthington’s crippled turncoat is not nearly as bland as others have written. Stephen Lang’s heavily scarred Colonel Miles Quaritch is both a highlight and a letdown; like something that stepped straight out of a 1980s Saturday morning cartoon, Quaritch is both mesmerising and yet so ridiculously plays to the testosterone-pumping villain stereotype, that the movie severely wants for an antagonist as three-dimensional as the luscious effects.

But it’s Zoe Saldaña as Na’vi love interest Neytiri that lingers in the memory longest. Using state of the art motion-capture technology, Saldaña’s animalistic expressions have been captured with a delicacy that even outdoes Andy Serkis’ work as Gollum. In true Cameron tradition, Neytiri is no damsel in distress either, matching Sully as a warrior during the immense finale.

Despite Avatar’s many flaws, it’s this assured direction that holds it together through the occasional awkward moment. At close to 3 hours, it rarely drags, and feels like the first genuine blockbuster spectacle since the Matrix wowed us in 1999. Whether Cameron’s hackneyed, effects-driven plot will stand up so well in 2D or on the small screen is another matter entirely. But Avatar was intended to be seen in 3D, and see it in 3D you must.