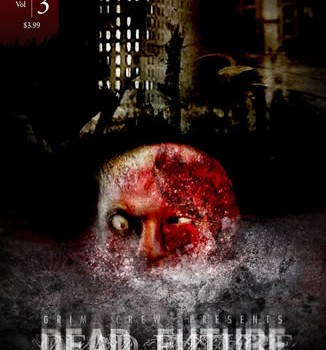 Martin Brandt and company continue to forecast the undead apocalypse in this anthology series by writers and artists from around the world. As with the previous two issues, it’s a diverse collection of unconnected stories that tackle the zombie formula from every angle imaginable. First up is One More Day by Martin Brandt and Gaston Pacheco, in which the undead reflect upon their past lives and the survivors wonder why they bother fighting to live. Bleak stuff indeed.

Rising Tides by Tiffany Brandt and Drake Harris, tells a tale of revenge from beyond the grave, and reminded me faintly of the Leslie Neilson episode from Creep Show. The strong contrast between black and white in Harris’s art lend this taut segment a genuine sense of foreboding.

Finally, Adam Wilson and Michael Stewart take us on a Road Trip to the End of the World, a brief but amusing tale told from the perspective of the begrudging chauffeur to two generic zombie slaying superheroes.

As with the past two issues, or anthologies in general, the tales here vary in quality, but while it obviously lacks the sheen of a mainstream book, Dead Future’s main appeal is that it’s like a comic book pick ‘n’ mix; you never know quite what you’ll be getting.

Dead Future is available from Drive Thru Comics at the heavily discounted price of $0.89 (!) until the new year. Normal price is $3.99. For more information visit www.grimcrew.com.Grim Crew Presents: Dead Future 3 Review