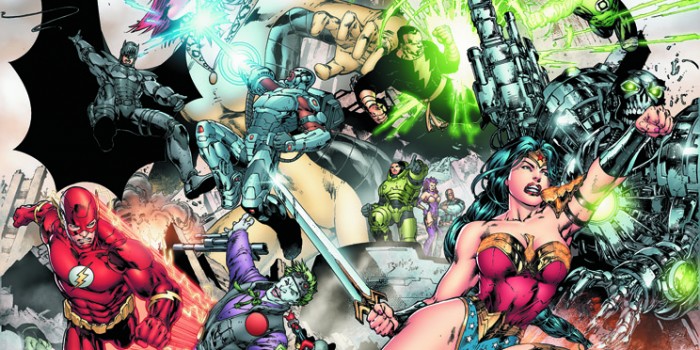 DC Universe Online: Legends sits in the rather unenviable position of being a comic book based on a video game based on a comic book. However, DCUO is no ordinary video game but an MMO; an online realm that will continue to expand with new content and plot developments alongside Tony Bedard and game writer Marv Wolfman’s 52-part series.

While the game’s plot essentially boils down to your homemade avatar battling DC’s most recognisable heroes/villains one at a time, and occasionally taking on Brainiac’s rampant forces, the initial premise behind DCUO is a good one. Lex Luthor travels from the future, informing Superman, Batman and Wonder Woman that after a devastating battle which ended the life of every major superhero, Brainiac’s forces descended upon our tiny planet and wiped out the human race. The cockroach-like Luthor managed to survive, and has not only time-travelled to our present to ensure that Superman lives to take on Brainiac, but dispersed Brainiac’s exobytes – nanobot-sized devices that bond with an individual and lend them superhuman abilities, conveniently providing a explanation for the boom in user-created supers – into Earth’s population.

Legends leaps straight into the action, assuming that its readers will have witnessed the game’s magnificent cinematic intro, in which Luthor’s army of super-villains annihilate Superman, Batman Flash, Green Lantern et al. For those few who’ve yet to see it:

Naturally, one of the pleasures of an alternate timeline such as this is that we get to see DC’s treasured properties kick the bucket, and the comic is no different, serving up the end of mankind in the first issue alone. The ragtag team Luthor has assembled by the end of this issue is an interesting mix of the lesser-known, including Mr Freeze, Solomon Grundy, Blue Beetle, Black Canary and Doctor Fate.

Were it not for its tie-in nature, DC Universe Online: Legends would be generic guff, but this looking to be a fun and, most importantly, accessible series, with some decent art by Howard Porter and others. This issue also added some interesting depth to Luthor’s actions, and I think it’s fair to say that gamers will want to keep up with the comic to fully appreciate the game. That is, if they haven’t already decided to unsubscribe when the 30-day trial ends.