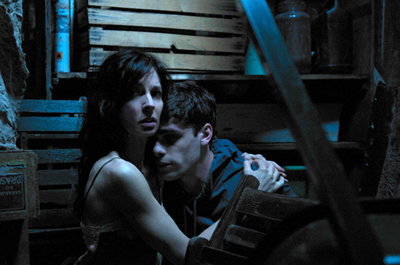 You always love the ones you hurt in this intimateFrench horror, which sees a bereaved mother bond with a troubled teenager after nearly running him down on an unlit country lane. Covered in blood and near-hysterical, Arthur claims that he has been attacked by a burglar caught in the act, and that his assailant will stop at nothing to kill him.

By calling Arthur troubled I’m already veering dangerously into spoiler territory, but from the moment Sarah spots him on the highway, it’s apparent that Arthur is as dangerous as he is endangered. We also know, from a rather gory prologue, that Sarah recently lost her 18 year-old son. His death resulted in Sarah’s separation from her husband, and she is vulnerable; both physically, living a reclusive existence in an isolated cottage, and mentally. As their flight from the deranged killer brings them together, Sarah and Arthur embark on a bizarre oedipal relationship, and we begin to question which potential victim is the more insane. Much like another recent Gallic horror offering, Martyrs, the plot here is dispensed in a non-linear fashion, routinely flipping our understanding of its character’s motivations upside down, and keeping viewer perception in a state of flux.

In Their Sleep is far from original, but it’s another example of the superior French slasher pic, coming from the producers of Frontier(s) and Inside. It’s adroitly shot, exhibits a credible performance from Anne Parillaud, and has a smart, anticlimactic ending that falls somewhere between the pointlessly bleak and eerily poignant.

In Their Sleep will be available on DVD in the UK from 14th February, from Optimum Home Entertainment.