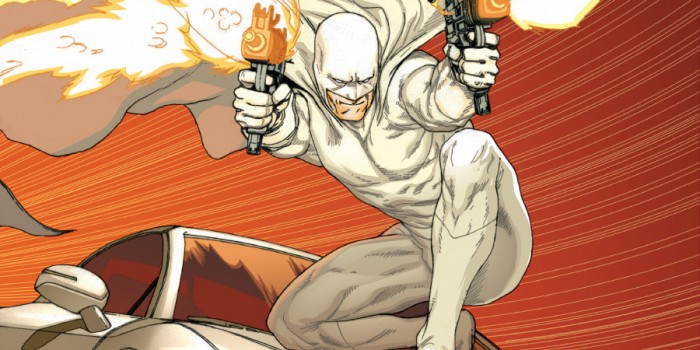 The Mark Millar hype train continues with Nemesis, a series which turns the Batman mythos on its head and supposes that an orphaned billionaire with revenge issues uses his wealth to become the fastest, fittest, smartest costumed villain in the world.

At least, that’s how Nemesis’ premise has been sold to the comic buying public. Decked out in a costume that resembles Batman’s, only inverted and minus the ears, Nemesis is essentially a super-powered serial killer; one who singles out a venerated law enforcer from around the world and puts him through a series of torturous trials, butchering friends, family and innocent bystanders in the process. In the first few pages alone, the caped criminal takes a chunk out of Tokyo before flying a plane into Washington and kidnapping the president. Nemesis’s latest fixation is Chief of Police Blake Morrow, a Commissioner Gordon analogue and all-round upstanding citizen. As Morrow is put through the ringer, revelations concerning his marriage and teammates are exposed by the sadistic rogue, who is not only a martial arts specialist with a high-tech arsenal at his disposal, but a master manipulator and strategist.

Millar seems convinced that the “Bruce Wane as the Joker” concept is going to revolutionise the comic medium – the media surrounding the series flaunts such arrogant pitches as “makes Kick-ass look like shit!” and “Civil War? Nothing. Kick-Ass? A warm up.” – but let’s not hold bold marketing against him. It’s easy to come down hard on a series that has been so severely hyperbolized that it couldn’t possibly meet expectations. A movie adaptation is already in development, and while I have my problems with Nemesis, as the comic equivalent of a big, dumb Hollywood blockbuster it inarguably delivers.

I’m not against gratuitous comic book violence, either – hell, I just read though The Boys last week – but here Millar piles on the excess without any good reason. Kick-Ass had heart, while this series is ultimately soulless. The titular villain is a sick bastard who enjoys devastating a city or forcing a teenage boy to impregnate his sister, yet he’s treated as an enviable genius with something resembling an agenda. At times the book reads (and looks) like a teenage fantasy, one devoid of morality, meaning or wit. Still, coming in at fewer than 100 pages, Nemesis is lean, mean, and well paced enough that less discriminating readers will certainly lap it up. It also comes as close to bringing the energy of action cinema onto the page than any comic I’ve ever read. Regular Millar collaborator Steve McNiven (Old Man Logan, Civil War) goes all out on some of the most explosive, visceral layouts ever put to panel, and the pair throw down the increasingly inventive carnage like it’s set to be illegalised. Nemesis is a guilty pleasure, then, a senseless and amoral rollercoaster ride that had the potential to be something far greater.