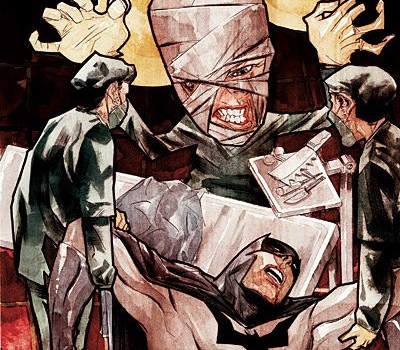 With Heart of Hush Paul Dini takes Jeph Loeb’s bandaged villain and injects some much needed pathos into his backstory, exploring Thomas Elliot’s warped relationship with his mother and the Elliot family’s criminal ties. The original ‘Hush’ arc was seemingly developed to give co-creator Jim Lee an opportunity to illustrate every Batman cohort and villain under the sun, and left little room for that rarest of plot elements known as character development.

Still recovering from his run-in with the Joker in the pages of Gotham Knights, Elliot has set up base in an abandoned hospital (the sort of thing that could only exist in Gotham City; does nobody have development plans for Gotham’s countless empty properties?) where he targets the only femme fatale to have ever truly captured Bruce Wayne’s heart, Selina Kyle/Catwoman, and decides it fitting to remove hers. Literally. Dustin Nguyen does a fine job balancing of the plausible and the fantastical in Dini’s script, which juxtaposes grounded flashback scenes with cameos from the likes of Doctor Mid-Nite and Mister Terrific. Hush’s brainwashed hospital workers, courtesy of the Scarecrow’s mind-altering drugs, are particularly sinister. An army of malevolence nurses and surgeons is a concept that may sound as though it harks back to the Adam West era, but is implemented here to chilling effect.

If there’s one criticism I have of Heart of Hush it’s that, ultimately, the storyline doesn’t further the Batman mythos; a criticism which extends to most Batman titles. From page 1 onwards we know that Selina will live to fight another day, that Hush will retreat into the shadows and begin orchestrating an even more diabolical scheme (cue mockingly evil laugh)… Nevertheless, Dini manages to make us want to see more of a character that was, prior to this arc at least, considered one of the most facile and overhyped Batman antagonists of the past decade. And that in itself is enough to make Heart of Hush glisten amongst the proverbial pile.