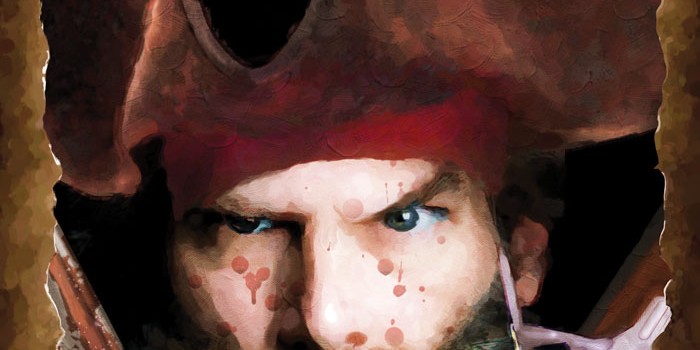 Press Release: Frank Forte, publisher of Asylum Press, announces the release of previews for the company’s April solicitations (Featured in Diamond Comics’ Feb. Previews).  Black Powder, written and illustrated by Dwayne Harris, is a very exciting action adventure series that takes place during the catastrophic New Madrid earthquake of 1812.  Each issue will be double-sized at 56 pages and retail for $7.95.  The book will be published quarterly.   Also released is the collected Warlash: Dark Noir signed pack.  This three-issue mini series features the creators Frank Forte (Zombie Terrors), Szymon Kudranski (Spawn), Royal McGraw (Batman: Commissioner Gordon, Steve Mannion (Fearless Dawn), Nenad Gucunja (Undead Evil) and more.  This is a great way for collectors to get the full series.  Comes bagged and boarded with a signed print. Synopsis: DOUBLE SIZED FIRST ISSUE!–A Bloody Frontier Adventure!–Set during the catastrophic New Madrid earthquake of 1812.  Black Powder is the story of Robert Young, a former captain in the Barbary Wars, and his river journey on America’s first steamboat to rescue the woman he loves from a gang of river pirates led by his cutthroat nemesis and former commander, Samuel Mason. On the way he encounters hostile Indians, swashbuckling battles, and several historical figures, all set against the backdrop of an earthquake that sinks islands, reverses the flow of the Mississippi river and wrenchingly exposes the fractures of a new nation itself. Synopsis: Features a collection of  Warlash:Dark Noir #1-3 ALL signed by creator Frank Forte.  Also included is a Warlash Vs. Zombie print signed by Frank Forte. Warlash, armored warrior of the apocalyptic future, is back.  These issues reintroduce Warlash with eight tales of hard boiled crime noir terror.  In “Phlegm Fatale” Warlash battles a biogenic beast in the sewers below Pittsburgh. By Frank Forte  “Grubbs”  introduces Warlash to the seedy underside of the city he is sworn to protect.  Art by Steve Mannion.  In Wormwar part 1, a secret formula is stolen from an underground lab and Warlash must find out who by Szymon Kudranski. In “The Demon”, Warlash is confronted with a satanic rite and hell spawned beast they have released.  Other creators feature Royal McGraw, Nenad Gucunja and J.C. Wong.  Covers by Bruno Werneck and Aly Fell.  Comes bagged and boarded.

About Asylum Press: Founded in 1999 by Frank Forte, Asylum Press is a unique publishing house specializing in high profile projects from some of the industry’s biggest names. Publishing action/adventure comics with Warlash, Black Powder, Fearless Dawn and DTOX.  Also, continuing their tradition of horror with Undead Evil, Satan’s 3-Ring Circus of Hell, Asylum of Horrors, Zombie Terrors, EEEK! and Beyond Lovecraft, venturing into dark humor with Billy Boy The Sick Little Fat Kid and The Cletus and Floyd Show, Asylum Press continues to be on the cutting edge of comic and graphic novel publishing.   Asylum Press is distributed to the comics trade by Diamond Comics, Haven Distributors and Tony Shenton and to the booktrade by SCB Distributors, Ingram, Baker and Taylor and Turnaround U.K.