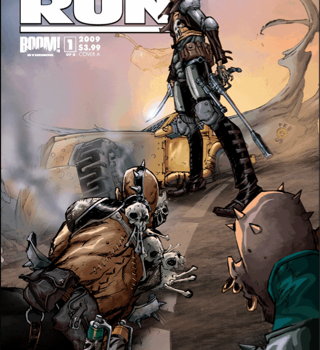 It’s Mad Max meets Vanishing Point, in this kinetic post-apocalyptic four part series created by Eureka scribe Andrew Cosby. When daredevil delivery driver Nick Masters’ sister is kidnapped by crime boss Kane, he is forced to deliver a package across the Zone, a stretch of devastated highway between Los Angeles and San Francisco across which only one man has driven to tell the tale.

Dead Run left me feeling a little cold; this book is really hurt by a lack of characterisation. Nick Masters is the archetypal grizzled survivor, whose sudden desire to cross the Zone rather than rescue his sister via direct methods makes no sense, while his uninvited travelling companion Becki appears to have tagged along simply to add the mandatory female presence. The kidnapped sister premise is also as tired a cliché as they come, and the Zone is a concept that appears to have been borrowed directly from the Russian novel Roadside Picnic. Or at least it would appear so. Francesco Biagini’s (Ninjas from Ibiza) art is excellent, as are Matthew Wilson’s restrained colours, and there’s still the possibility that this series could develop into something more interesting than its hurried beginning promises. The premise of the Zone alone might be intriguing enough to convince me to buy the second issue of Dead Run on a quiet week.

Hopefully, Cosby and Nelson will disclose more about Nick Masters and co. next month. Even the most high-concept, fantastical works of science fiction need protagonists you can root for, not faceless pawns that are pushed into place to get a plot rolling. As exciting as a voyage through unexplored lands is, we really need to care about the people making that journey to stay with them all the way.