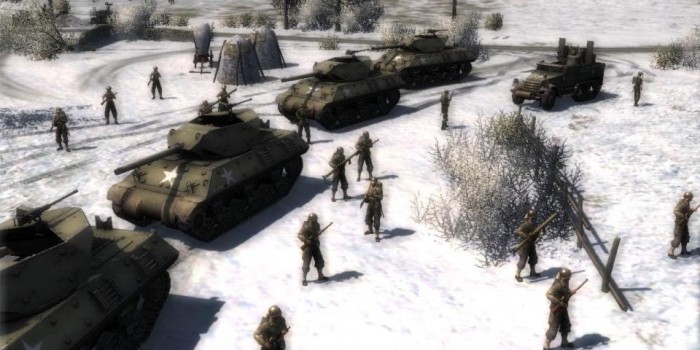 Medal of Honour may not have been the first World War II game, but since that title debuted for the original PlayStation in 1999 there’s been a steady market for historical wargames that, if sales of Call of Duty 4 and Company of Heroes are anything to go by, isn’t about to die face down in the mud anytime soon. In this last decade developers have tried everything to innovate the setting, from including prototype aircraft to bringing zombies, werewolves and vampires onto the field – but there’s no escaping the fact that the WWII well has long run dry. It’s a disheartening experience, hopping from one World War II game to the next and re-enacting the same few dozen battles no matter which game you play.

This has never been more evident than during the first level of Russian-Ukrainian developer Games Factory Interactive’sreal-time strategy Officers, in which your Allied forces invade Omaha Beach. Officers has a lot to boast about; it’s not just your common-or-garden RTS but a “massive real-time strategy” with maps representing up to 25 square kilometres each and a potential (though I didn’t bother to count) 1,500 units engaged in a battle at any one time. But while Officers has a fair amount to offer the RTS community, by entering the saturated WWII market it inevitably opens itself up to comparison to superior titles. As it is impossible to review this game without at some point comparing it to any of the current reigning champs of WWII real-time strategy, let’s get it out of the way and say that the games scale and deliberate pace definitely lend it comparison to Blitzkrieg or the Total War series rather than Company of Heroes – though some of the games elements, such as the experience system, will be familiar to anyone who has played that game.

While Officers’ multiplier allows you to take sides with the Allied, Axis or Russian army, the single player campaign sticks with the Allied Forces, taking you through such conflicts as the Operation Overlord invasion of Normandy and the crossing of the Rhine. There are only six missions in total, but they’re positively colossal. As with GFI’s other recent release, Hired Guns: The Jagged Edge, Officers throws you into the game with all the hostility of a Gestapo interrogation officer. Even on the easiest difficulty, the tutorial alone isn’t enough to prepare you for the single player campaign – that your missions often start with the overview map being pointed in the opposite direction of the on-screen action doesn’t help much, either.

But once you become accustomed to the games slower pace, it becomes apparent that Officers isn’t about bullish direct confrontation but whittling down the enemy’s numbers through attrition. The ability to speed up the gameplay, or slow it down if you feel the need, makes your steady progress across each expansive terrain more endurable. Units have four self-explanatory skills: shooting, camouflage, detection and repair (driving for vehicles). These abilities all level-up with time, giving you good motivation to keep those indistinguishable little men who heed your God-like orders alive. Reinforcements are gained by taking over strategic points, small (bonuses such as artillery support) and large (more income). As there is no resource harvesting involved in Officers, these strategic points are vital to your success, and your infantry are able to plant considerable mine fields around them.

Supplies, predominantly food, also provide a big factor as things heat up, with additional supplies delivered by truck. Naturally, both sides have an interest in intercepting these convoys, thus slowly defeating their enemy via indirect routes. Fortunately, starvation isn’t much of an issue, as your forces are generally larger than you’ll possibly be able to cope with. The usual tanks, trucks, aircraft, scout vehicles and anti-tank cannons are all present, with the infantry ability to capture enemy vehicles providing a sneakier way to turn the tide on the opposition. Medic trucks are particularly important, as they heal all wounded infantry within their radius.

It’s these precious moments, when you succeed swiping your enemy’s best tank and supremacy of the map swiftly, unexpectedly switches over, that Officers comes into its own. Control of strategic points is generally tentative at best, and the large variety of strategic opportunities grants the multiplayer an excitingly unpredictable nature. Unfortunately, at time of reviewing only LAN competitive play was available, so only time will tell if the game’s vital online component adds enough longevity to the main campaign. The lack of a good match-making component will obviously kill a game like this.

For a game which has been delayed for several years (a demo was released in late 2006) Officers’ graphics are dull but adequate, with some detailed infantry models and vehicles. The dynamic day/night cycles and seasonal effects adds some welcome diversity into the mix, but numerous graphical blemishes, such as the vision-impairing grass effects and unconvincing ballistic effects undermine the experience a little. Nevertheless, the game runs stable at the highest settings on a mid-spec system, despite the immense scale of the battles; though be warned that the substantial maps take a while to load even on a faster PC. As this game was developed in Russia, the voiceover work is expectedly horrendous, with the American troops sounding like a legion of lunatic Egon Spengler clones.

Officers: World War II is an acquired taste, requiring a more deliberate approach to battlefield domination than many RTS gamers will be used to, or be prepared to spend the time to appreciate. If you can forgive the dated graphics and an often unmoving sense of atmosphere there’s a great deal of depth here, magnified by an often overwhelming sense of scale. The casual RTS player would be better advised to opt for the more accessible Company of Heroes, but for fans of World War II strategy who just aren’t satisfied with leading a mere three dozen units into battle, Officers comes recommended. If nothing else, it’s one of the few real-time strategy games on the market which actually makes you feel like you’re controlling a whole army… or at least a good few hundred brave men.