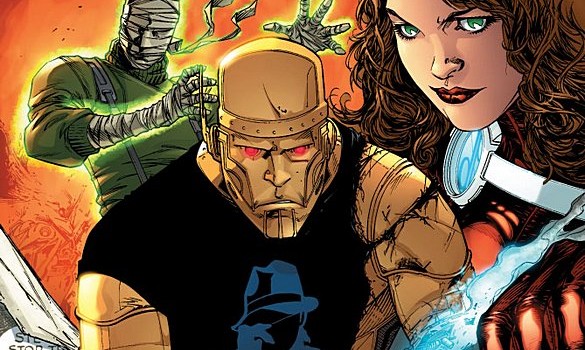 The trouble with allowing Grant Morrison to work on any established series is that he has a style of writing that few can successfully follow on from. His surreal yet intelligent 90s relaunches of Doom Patrol and Animal Man have almost been curses for the properties; the Doom Patrol especially have undergone numerous false starts and retcons over the past decade. The most recent of these saw the team’s sinister benefactor Niles Caulder return from the dead as a result of Superboy-Prime’s reality-altering mischief in Infinite Crisis.

Then again, the short life expectancy of the average Doom Patrol member has always been at the centre of the title’s appeal, with Robotman being the only constant member. Fortunately, from the first few pages of this issue it is evident that Keith Giffen is taking the same irreverent approach to Doom Patrol that made his run on Justice League International such fun. This issue had a great swing to it, commencing with action but then quietening down as the Patrol’s latest mission ends with the death of a new recruit. The leads are all difficult to truly like – Negative Man is insane, Robotman is literally cold-blooded and Elasti-woman is a narcissist – but resident priest Father Leslies provides some much needed humanity; without him this series could prove too emotionally withdrawn.

As entertaining as Doom Patrol is proving, the highlight of this new series has to be the Metal Men “Second Feature” which sees Giffen team up once gain with Justice League International cohorts J.M. Dematteis and Kevin Maguire. Dr. Magnus’ metal children are another team that have had trouble sustaining a regular series; too wacky for mass appeal and too goofy to have ever merited a Vertigo makeover. It’s great to see them back to their screwball antics; even if for only ten pages per month.