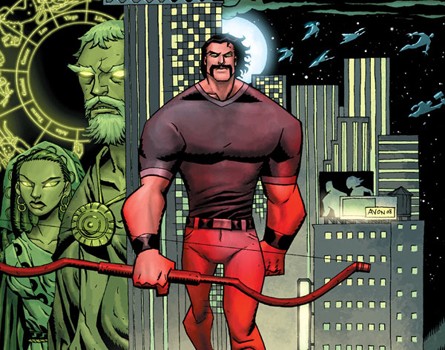 You only have to glance at the first issue of God Complex, the new series by Oemin, Berman and Broglia, to appreciate who the series’ target market is. From the TV animation inspired artwork to Oeming’s dialogue-heavy script, God Complex is Powers without the cops. Retired Greek God Apollo (now Paul) has forsaken immortality for a humble job in a restaurant, where he lusts over the owner’s daughter Sophia. When a scrap with local gangsters reveals Paul’s superhuman powers, he becomes a local celebrity, which doesn’t particularly please Zeus and his Pantheon of the Gods.

If the either the concept behind God Complex or John Broglia’s enjoyable character designs takes your fancy, then this issue might be worth a read. Otherwise, this is yet another example of superhero comic books complacently falling back on well-worn clichés. The idea of ancient deities wandering amongst modern mortals is nothing new – Thor is currently using the concept much, much better – and the scenes with Zeus, Hercules and company heading a global conglomerate are simply woeful. Yes, rich blokes in suits are bad; yes, they rule us peasants from atop pristine skyscrapers. We get it.

Quite why Apollo gave up his position among the Gods to live a life of unrewarding drudgery is perhaps the sole element in this hackneyed plot that might lead to something more interesting. Berman and Oeming need to grant God Complex a better hook, before this new title is swamped by similarly vacuous material. Nice art, though.