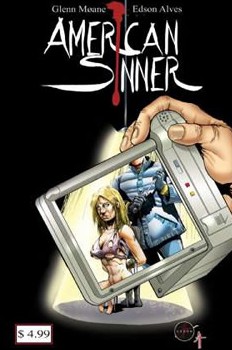 Frank Manning makes movies for a living. You wouldn’t guess this by looking at him or his dilapidated home, but this is because Frank keeps his profits concealed from prying neighbours and the authorities. His lucrative speciality is snuff movies, which Frank produces with his redneck cousin Kevin, selling them to mysterious connoisseur Mr Wet, who he has yet to actually meet. When a storytelling subject as risqué as snuff movies is mentioned, it’s likely that anyone reading this here review has already clicked the back button on their browser, or is ordering American Sinner right now. And like all effective horror, this is one comic that will definitely polarise readers. It’s a relentlessly grim tale of greed, in which psychopathic narrator Manning doesn’t attempt to justify his actions, describing what he does as “the American way to achieve success.” Frank Manning kills innocent people because he wants to; that he profits from the resultant film footage is an added bonus.

Yet while American Sinner is indeed a gory and macabre book, Norwegian writer Glenn Møane just about manages to keep the level of violence from infringing on intolerably sickening, torture-porn territory. Much like Patrick Bateman of the novel/movie American Psycho, Frank and Kevin are almost less despicable for atrocities they inflict on their victims than the manner in which they nonchalantly resume about their daily business, and the murders themselves are somehow less disturbing than the moments of calm in-between. Like the aforementioned Bateman, there’s no punishment, redemption or remorse awaiting Frank Manning – he may not be too smart to slip up, but he’s calculating enough to evade the police.

The monochrome artwork allows Eleventh Hour contributor Ebson Alves and Marcelo Dantas to get away with far more than would be acceptable within the regions of “good” taste were this book in colour. Alves’s pencils are a little inconstant, but the page compositions are good enough to pull the reader in without the need for flashy visuals, and the bold inks from Dantas make this a story told with clarity and purpose.

Subjectivity has to come into these reviews, and I’ll admit that I found American Sinner a little hard to stomach. I tend to avoid the horror movies from which it is clearly inspired – I recently lost sleep for a good week after watching Martyrs – but it was undeniably well written, and more than adequately illustrated.

It’s rare to find a horror comic that doesn’t fall back on the ever-popular comic book staples that are zombies, werewolves or vampires, and I’d definitely recommend that fans of slasher movies give this unsettling 48 page one-shot a read. In a medium rife with throwaway stories and unremarkable characters, American Sinner is a proficiently chilling tale that will linger uncomfortably in the back of your mind for weeks to come, whether you want it to or not.

American Sinner can be purchased here at indyplanet.com for just $3.99. 48 pages, black & white. Mature readers only!