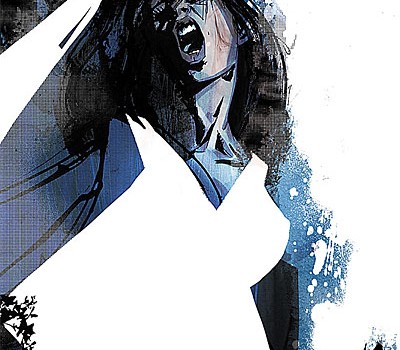 Issue 1 of Greek Street was quite possibly one of the bleakest, unpleasant comics ever published by Vertigo. While the series has yet to top supposed protagonist Eddie’s self-castration, Peter Milligan has managed to reach the end of Issue 3 without a single joyous moment. His depiction of London’s Soho is one without blue skies; where every player is a crook, a gangster or a harlot. And a guy who’s just bedded and then murdered his mother. There’s no denying that Greek Street has the potential to be a quality new title, but it’s in dire need of something other than murder, mutilation, nudity and child abuse. Inspector Dadelus is currently the only ethical character in this series; though presumably he’ll have his secrets. And the three wise hookers are progressively undermining the finer parts of this title – comic books don’t necessarily require impossibly-proportioned naked women on every other page to tell a mature story.

Davide Gianfelice has an accomplished sense of visual narrative, and his illustrations bring a restrained noir styling to Milligan’s macabre world. But I must confess that Greek Street is not a world I want to return to every month. Milligan’s intricate tale is finely written and expertly illustrated, but it continues to lacquer on the angst, pain and suffering with not even the slightest hint of soul.