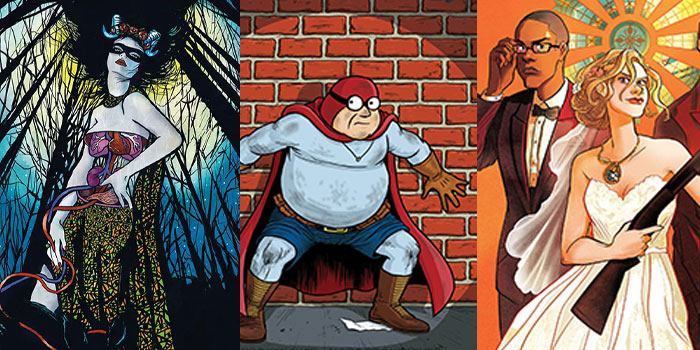 I had no idea about this real-world event going into von Buhler’s graphic novel, also titled The Illuminati Ball, which take the basic concept of the sensual parties and merges them with a strange tale of genetic engineering and a challenging take on animal rights. There’s a good reason the Ball’s five guests, introduced by their entry questionnaires and not as randomly picked as they’d like to believe, are asked to answer three questions concerning their meat intake.

The plot, as far as I could keep up with it, twists, turns and descends into increasingly demented depths, with the Ball’s hosts as disputatious as their guests. I found myself enthralled by von Buhler’s singular vision and art, which often felt like less refined, even more drug-fuelled take on Mike Allred’s retro pop aesthetic. The Illuminati Ball is notfor everyone, but those it does connect with will love it dearly.

The Illuminati Ball is out in the UK October 20th.

Jim Provencher’s Dodge Danger is a costumed superhero more reflective of our times, or at the very least the rising age of the average comics readers. By day, ineffectual middle-aged man Lester Garbonza is belittled by his wife, but by night he takes to the streets of Massatucky as his crimefighting alias. But the ill-equipped vigilante is out of his depth when he discovers a sinister organization known as G.L.O.V.E. and a fast food tycoon’s dastardly plot to control minds using his hotdog empire’s special sauce.

Dodge previously starred in a Norwegian newspaper strip, and Provencher’s history in short and snappy cartoons is evident on every page here. If gentle toilet humour and dad jokes are your thing (they’re certainly mine) you’ll find the laughs fast and hard, and a unique hero in the lovably useless Lester.

The first volume of Dodge Danger is available now on Amazon.

Going to the Chapel #1

Pitched as “if Die Hard got hitched to Wedding Crashers”, this four-part darkly comic thriller sees an affluent bride’s deceptively perfect wedding interrupted by a quartet of masked criminals.

Where Going to the Chapel heads beyond that I can’t say. This first issue is leisurely paced but satisfying, taking its time establishing the central characters and premise with a confidence which assures readers that writer David Pepose (Spencer & Locke) knows exactly where he’ll be taking us in future instalments.

Gavin Guidry’s (The Night Driver) chiselled characters and economical compositions bring Pepose’s snappy dialogue and fiery bride to life with casual style, and Liz Kramer’s rosé palette lends the book a distinct tone. A nice touch: the robbers’ iconic Elvis masks are each a different take on the King, and include a zombie Elvis.

The first issue of Going to the Chapel is out in comics stores and on ComiXology now, with the second releasing later this month.

Also on my shelf…

I’m currently getting more submissions than I could possibly review or reply to, so henceforth I’ll be adding a few 1-2 sentence reviews each week to other books I’ve recently enjoyed, or new installments of titles I’ve previously reviewed. Links will be provided so you can find out more yourselves, you lazy bastards.

With tongue planted firmly in cheek, Sam Johnson’s Geek Girl is both a throwback to the carefree comics of the 90s and a cheery satire on modern superhero titles, following popular co-ed Ruby Kaye, who with the aid of a pair of super-tech spectacle becomes the titular superpowered clutz. In Volume 2: ‘Crime War’, lent much charm by Carlos Granda’s polished art, Ruby enjoys a relaxing stay in hospital while Summer takes on the glasses, surrounded by a host of inventively ludicrous costumed freaks. Catch up on the series at www.geekgirlcomics.com.