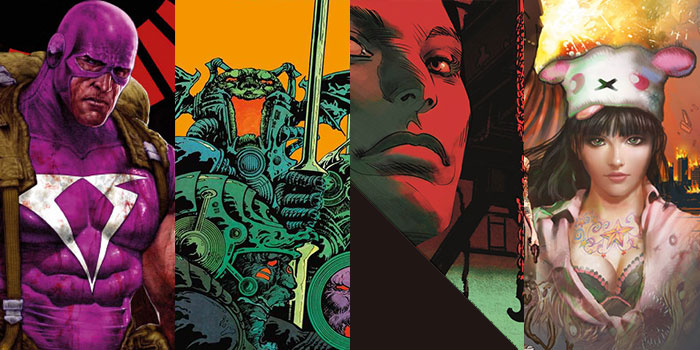 After a bit of an unexpected hiatus, I thought this instalment of Indie Penance should focus on Titan Comics, as I’m working through a humungous backlog of review copies from every publisher and indie creator under the sun, and they’d recently sent me a few gems.

Titan Books’ relatively new comics imprint mainly deals in series based on recognisable properties such as Doctor Who, Heroes, Assassin’s Creed and Dark Souls, but the publisher also has a fine of catalogue of creator-owned comics, archive reprints and fine European translations. First up is Jay Gunn’s remarkable debut Surface Tension, set on a remote British island months after mysterious coral structures rose from the ocean and mesmerised almost the entire human population into the sea. I absolutely loved this book – read the review here. Originally published through Liam Sharp’s Madefire app and now collected by Titan both digitally and in hardcover, Cap Stone feels like a throwback to the British comics of the 80s and 90s, in which seemingly discordant ideas were thrown at the wall with creative abandon. Oh those heady days…

Liam Sharp’s art is magnificently unpredictable (the similarly eclectic Bill Sienkiewicz writes a passionate foreword), changing style from one page to the next as we follow Charlie Chance’s investigation of her half-brother, the eponymous Captain Stone, a disgraced superhero who turned publically-derided conspiracy nut, and his supposed demise.

Charlie Chance, AKA The Pet, is a vegetarian model turned ravenous cannibal, after the meat industry objected to her PETA demonstrations and injected her with a drug that turned her into a meat-craving cannibal. Which has to be one of the most brilliantly barmy origin stories I’ve ever read. Phillipe Drulliet’s Lone Sloane is like some lost historical artefact that could have swayed the course of comics were it given global attention in the 60s and 70s.

Jacques Lob’s story is pretty much your standard pulp space opera affair, but Drulliet’s art is the draw here – the debauched pleasure planet Delirius is a feverish, fantastical landscape that defies all description. Or indeed logic, but everything moves at such a blistering pace that I was too bewildered by Sloane’s awe-inspiringly lurid universe to care. It’s like a mental, drug-fuelled and decidedly more French Flash Gordon. This graphic adaptation of French crime author Jean-Patrick Manchette’s 1977 short novel — the confusing title presumably used to distinguish it from Ed Brubaker similarly named series — is as noir as a black alley cat on a starless night. Doug Headline and Max Cabanes bring avenging angel Aimée to the panel with the utmost of reverence for the source material. Such slavishness is an approach I’m not usually a fan of, but here it works brilliantly.

Manchette’s mysterious femme fatale is the sort of sociopathic bitch that I never liked, but I nevertheless found her ambiguous scheming fascinating. Cabanes’ art is captivating and feels faithful to both the genre and its era, and the script, which I assume takes extracts directly from the novel, is so immersive that by the final page I felt as though I’d absorbed a beefy primer of Manchette’s work. The premise is simple: a fatal STI known as the G+ virus is infecting London’s youths giving them all manner of superhuman abilities. The catch? Six months after infection, they’ll be dead.

This follow-up to what has apparently been Titan’s most successful creator-owned series is a perfect jumping on point. The G-positive central characters are your usual bunch of X-men inspired heroes and villains, but there’s a fine anarchic streak and sense of class struggle behind Monty Nero’s satirical plot, lending Death Sentence a bit more edge than its contemporaries. Plus, any series that so astringently vilifies the Tories can count me as a reader.