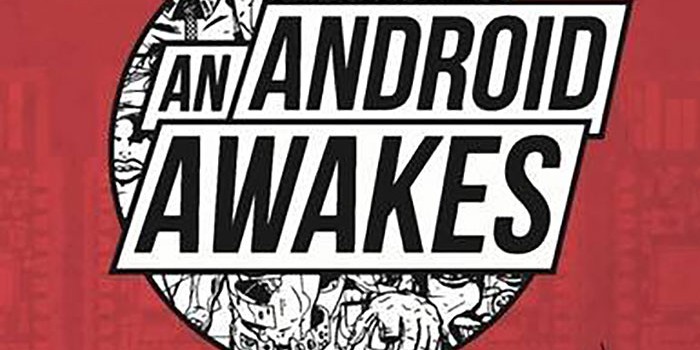 Looking to read something a bit different? Then I suggest you check out this extract from Mike French’s brilliantly eccentric An Android Awakes, a short story of sorts entitled ‘2306’.

I reviewed French’s dizzyingly original science fiction anthology last year, which tells the tale of android P121928, given 14 more chances to write something publishable before his ruthless publishing corporation deactivates him, and said the following:

P121928’s all-too human (and relatable) struggle to produce something deemed marketable by his owners forms the frame narrative for a selection of short stories, in an approach reminiscent of Ray Bradbury’s The Illustrated Man. Some of French’s efforts are funny, some are sad, some are epic, some are small and silly. Some are set in a cyberpunk-inflected dystopian future far removed from our own while others could take place tomorrow… many lack the structure to even be defined as stories, but are instead ideas or concepts that reveal a fresh perspective on previously spun tales.

With each rejected submission, old concepts, characters and names are reiterated and reinvented in what has to be one of the most unique world-building exercises I’ve ever had the pleasure of reading.

If 2306 wets your appetite, you can find out more on An Android Awakes on Elsewhen Press’s site. Illustrations by Karl Brown. The scrape of chair legs, dimmed lights, a cough, the sound of rain against a window.

“Please relax.  I’m going to ask you a series of questions.  Try and answer them as honestly as possible.”

“You’ve woken,” says the detective.  “You’re cold.  The window has blown open and you can hear a dog barking outside.  Beside you lies a body.  It is still.  There is a pool of blood seeping into the mattress.”

The detective notices the girl move a finger to her ear, then glances at her breasts: random sub-conscious bursts bring suggestions of desire.

“Can you answer please?”

“You haven’t asked me a question.”

“Is that important, there is a dead body beside you.”

“I haven’t got a boyfriend.”

The detective pauses, picks up a pencil, ticks some boxes, notices as he does the sound of insects, an unopened packet of nachos in the corner of the room, the position of a vase with cut flowers, the sound of the girl breathing: the rise and fall.

Screening out the data assaulting his senses, he continues, “There is a dog barking outside, perhaps you go to look out of the window?”

“Yes, perhaps I go to look out of the window.”

“Excuse me.”  The detective gets to his feet, walks over to the sink and turns off a dripping tap.  He notices the layer of dust on the floor, knows the composition, age, rate of deposition.

The detective returns to the table, takes the lamp suspended above them and directs the light towards the girl.  She blinks and instinctively raises her arm to shield her eyes.  He sees the line of her bra under her cotton top, the stitching, calculates her heart beat.

“Does it bother you that your boyfriend is dead?” he says finally.

“I haven’t got a boyfriend.”

“Try to imagine you have.”

“And then try to imagine he’s dead?”

The detective takes an apple from a suitcase, rubs it on his jacket, takes a bite, places it on the table between them.  There is a creak of floorboards in the room next door, the sound of television, the springs of a mattress finding resonance.  The detective hesitates and imagines that he and the girl are naked together, that it is them on the other side of the wall: hot, passionate, fucking.

“An apple,” replies the detective.  “Would you like to taste it?”

The vibrations from the headboard next door settle in the detective’s ears.  The tap is dripping again.  Rain against the window.  A dog starts to bark outside.  The detective moves quickly as the gasps reach a crescendo and brings his hand down on the apple, squashing it to pulp against the hard grain of sliced oak.  The girl flinches.

“Is there an apple there any longer?” he says.

“Imagine there is,” says the detective.  “There was a moment ago, it can’t be that hard to imagine it’s still there.”

Footsteps in the corridor.

“Can I have the next question?” says the girl.

“You look up and see the date the seventh of June spelt out in blood across the wall.  The handwriting is yours.”

“Can I have a cigarette?”

The detective picks up a piece of apple, “Do you know the significance of the apple to the creator of this test?”

“Can I please have a cigarette?”

“I didn’t think so.  Would you like to know my secret?”

“I have a nasty habit.  Can’t help myself really.  Don’t know why I do it, but then who knows why we do anything.  Samantha’s Boutique, on fifty-fourth street.  Every Tuesday they get a new delivery of bras.  I always go in there and buy up every bra that is a size 34D.”

The girl shifts in her chair and looks at a point beyond the detective’s head.

“What do you think about that?” says the detective as he leans towards her.  Small metallic clicks ripple out into the stale air.

“Is this part of the test?”

The detective looks at his Sturmanskie wristwatch, “Turing Test finished at 23.06.”  Taking out a packet of Chesterfields from his pocket, he taps out a cigarette, passes it across the table.

“Thank you,” says the girl.  She places it between her lips and leans forward as he opens a black crackle Zippo lighter.  There is the CLICK of steel and the strike of flint.  Sitting back, she inhales, then blows smoke towards him, “Well, you finished looking at my tits?”

“You register as human,” replies the detective.  “There’s not many of you left, this is an honour.”

“And so what happens now?”

“Your chemical substrate will be destroyed.”

“You know we created your ancestors, don’t you? That you’re just a stinking, fucking robot?”

“You are aware that you are just a myriad of chemical reactions with no real sense of intelligence,” replies the detective.  He pulls out the blaster strapped to his leg, gets to his feet and points it at her, “Do not be alarmed.”

The door opens.  Movement.  The detective stiffens as he feels a gun against the back of his head.

The boyfriend starts to speak.  Before he finishes his first syllable, the detective runs a linguistic analysis program to determine the boyfriend’s emotional state, calculates the probability for survival given the angle the bullet will enter the back of his own head, runs simulations of all possible outcomes.  At the same time he imagines himself and the girl driving in a 1964 Ford Mustang Convertible out of the city together.  There is a mockingbird in a cage at the end of a steel pole soldered to the bonnet: on the back seat are gas masks.  His hand is on the steering wheel, the other around her shoulder.  He thinks of Paris in the smog, love, passion, food, the taste of her blood on his lips.

“So,” says the girl, her voice snapping the detective’s mind back to the confines of the room, “try to imagine having your head blown off.”

“I could say the same to you,” says the detective.  He smiles and nods towards the waste disposal unit in the kitchen.  “After I feed your boyfriend’s body parts into that I will ask you again if it bothers you that your boyfriend is dead.”

Outside the impact of the rain against the window pane distorts the view inside of the standoff between the boyfriend, the detective and the human.  When, finally, the shot comes, the noise passes through the apartment wall and radiates out into the city.

The day I received the rejection for this …

We regret that it did not quite “click” with us

was the day I found my cat lying dead on the seat of my car.  It took me a while to notice as on top of it was a large parcel containing the spare body parts I had ordered.  A delivery drone had dropped it off.  From a great height from the look of the cat.

I buried it in the back garden, said a prayer, and stood for a moment over the grave wondering if I should be feeling more of a sense of loss.  After a while I dug the cat back up, stuffed it, sprayed it gold and set it against the back door as a doorstop.

I felt better after that, like its death wasn’t in vain.

I left it a while before going to the freezer in the basement.  Out of respect really, somehow it felt wrong just defrosting another one straight away.  But after lunch I felt the time was right and descended into the dark.

I stopped half way down and looked at the recruitment poster from the Android Publishing Program, which I’d stuck there all those years ago.  It had Human Culture Needs YOU!  in big black writing set under a picture of a massive android with one eye.  The subtext of course being that in controlling their culture we could bend them to our will – most of them blind to the importance of stories to their society and naively seeing it all as all rather harmless good fun and entertainment.  Well that was the original purpose anyway, these days the androids that controlled it all had lost themselves in profit and popularity.  I couldn’t care less to be honest, I just liked writing stories.

The freezer was stuffed full of replacement cats.  Reaching in, I picked one up and turned it over to read the defrosting instructions.  It was going to take four days in the fridge or two days in a cool room.  A big warning label advised me not to defrost it in the oven.  Pulling off the shrink wrap I carried it back up to the kitchen, out into the garden and set it down to catch the afternoon sun on the patio.

By the morning it was purring around my feet and drinking milk.

If only everything could be fixed so easily.