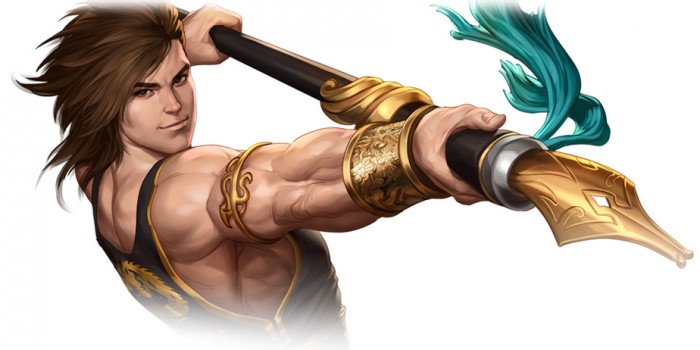 While Manga Studio began as a highly focussed program focused entirely towards monochrome Japanese comic art, both the fourth iteration and this latest update have seen the software reinvent itself as a formidable art package for comic artists and illustrators of all formats, mediums and disciplines.

Its contemporaries may attempt to offer Swiss Army Knife art packages, but Manga Studio’s progression hasn’t taken away from its singular purpose: it’s a program for comic artists, colourers, letterers and writers.

Smith Micro were kind enough to send me a copy of the latest iteration for review, and I’ll be providing a light overview of both the additions to 5 and my own thoughts on the software.

I should probably take a moment to warn anyone who’s made it this far that, while I have a background in graphic design, my illustrative skills are limited at best.  So please, receive this post as not so much a review as an amateur’s opinions, from the perspective of someone who occasionally likes to sit down and draw what they “see”, but doesn’t get to do it nearly as much as they’d like to.

The two examples I’ve shown in this post are from a Doctor Who piece I’d planned, but will probably now never get round to finishing, as well as some character concepts from a webcomic project I’ve had floating about for several years, The Scribe. For much of the illustrating I used a Wacom Cintiq in conjunction with a Wacom Bamboo.

Perhaps Manga Studio 5’s most conspicuous new feature is the cleaner, more streamlined interface. My main personal gripe with Manga Studio 4’s interface is that it often felt cluttered and, for someone used to the Adobe Creative Suite, unintuitive. Celsys have given the software a considerable overhaul, and its default layout now sits somewhere between the previous version of MS and Adobe Photoshop. Inking in Manga Studio is a joy, thanks to way in which the software allows the artist to effortlessly switch between raster and vector layers.

I’ve often thought that the people behind Manga Studio 4’s marketing should have had a campaign based around the, ahem, Two Girls One Cup Youtube reaction fad, and promoted the program with a series of artist’s reactions to the then revolutionary pen and brush tools. They were that good.

In the few years that have passed since 4 was released, other programs have upped their game. Adobe Illustrator has been evolving persistently to accommodate vector art, and will likely be the choice for many professionals, but I feel that the ease with which Manga Studio allows you to hop between vector and raster is still its primary selling point. It’s effortless, and the improved interface does everything it can to not stand between artist and artboard. And the post correction on the vector pen tool is still awesome. Several character concepts from my webcomic project, The Scribe… which will probably never see the light of day.

While the vector tools here are a little lacking when compared to Illustrator – with which I could have illustrated the TARDIS shown below in less than half the time – they’re more than competent. The Correct Line tool, which allows you to thicken, reduce, or smooth out vector lines in seconds, is a Godsend to comic artists on a deadline looking to scale or re-compose their work. The new perspective line are flexible and intuitive.

Manga Studio 4 had a pretty decent library of textures and stock images to help the artist with an impending deadline, and MS 5 notches this up to 11. There’s now some great (albeit slow) 3D models available, alongside a series of preset poses. As with a lot of features in this package, it’s not going to compete with, say, DAZ Studio, but as part of the overall package it’s a nifty feature which might just shave some precious time off your comic art.

Some of non-illustration tools are  also difficult to locate and not exactly spontaneous. But perhaps its telling that Manga Studio’s pencil tool is set to the default colour of blue; if you’re using the software, chances are you’ll be inking over those blue line with a traditional approach.

You can also sketch out your own perceptive rulers now; they’re far more intuitive and flexible.

For the price, Manga Studio has always been a worthwhile investment, be you a younger, aspiring artist looking for a more than competent package at a reasonable price, or a comic book illustrator looking to use the program alongside the more standard design software.

Manga Studio 5’s paintbrushes and blending tools are as tailored towards comic art as the rest of the package, but they’re surprisingly extensive.

Worth upgrading to MS 5 EX?

There’s a list of reasons to upgrade to MS 5 EX here, and as you can see most of them are to do with creating multiple page documents. If you’re planning to use Manga Studio to produce large-scale and long term projects, then the EX version will likely be a worthwhile investment.

But there’s far less of a disparity in features with 5 and 5 EX and there was in the limited Debut 4 and it’s beefier cousin. First time users, students and self-publishers will find that most of the features lacking in the standard MS 5 package, such as the ability to create 2-page spreads and page numbering, can be worked around with little effort. The First Doctor image, still nowhere near being finished…

With its latest upgrade, Manga Studio has managed to become a Jack of all trades without compromising its core comic artist user base. I can see more comic illustrators using Manga Studio more than ever before, particularly are inking and colouring. In just a few years it’s gone from a neat little program with a niche user base, to the Swiss army knife of art software, but still stayed at the same bargain price… especially considering how.

Thanks to an improved interface, MS 5 managed to other a plethora of tools and options without smothering or hindering my creative process. When I finally/hopefully begin my long overdue webcomic project in 2014, I intend to use a combination of Manga Studio, Photoshop, Painter, Illustrator, DAZ Studio, Quidam, and SketchUp. But if I had to choose just one of those programs to create comics with? Manga Studio it would be.