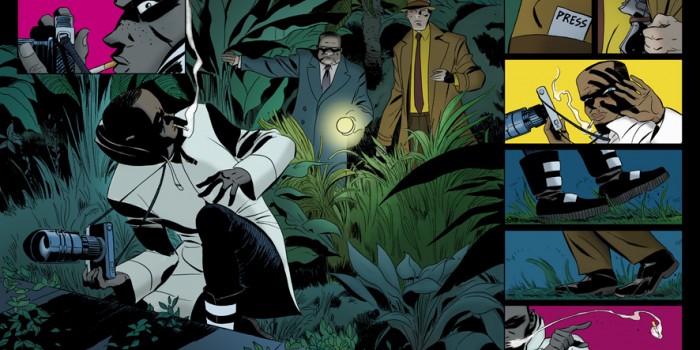 There’s something startlingly modern about The Private Eye, the new series by Brian K. Vaughn and Marcos Martin, who previously worked together on the superb Doctor Strange: The Oath.

And I’m not referring to the creators’ decision to distribute the series digitally via a DRM-free “name your price” model, though that decision does feel even more relevant given the series’ depiction of a future in which identity is seen as the most valuable asset an individual possesses, and everybody hides their true self behind a secret identity (referred to as “nyms”) and, fittingly for comics, a masked costume. Enter Patrick Immelmann (though that’s not his real name), an “unlicensed journo” and private investigator of sorts. For a high price Immelmann will go to illegal extremes to uncover an individual’s identify; in the case of the job he’s working on as the series opens, tracking down a childhood sweetheart who, like many within Eye‘s sleek and impersonal cityscape, went off the grid and now lives under an unreachable persona.

Marcos Martin’s gaudy, fancy dress party of a future is the sort of ironic spectacle that could only work in comics. You might ask why civilians would hide their identities by donning bizarre fish heads, insect eyes and bear costumes which would surely attract attention rather than avoid it; but I guess that asking mundane questions of a work such as this is missing the point entirely. Presented in a “widescreen” format presumably designed with tablets in mind, it looks fabulous, but The Private Eye is more than just kitschy eye candy. Vaughan manages to pack a hell of a lot into 28 pages of script. Beyond the obligatory novelty sci-fi inventions (a synthetic skin known as “flatex”) Vaughan does an excellent job of grafting flesh onto what had the potential to be a flimsy idea.y

Perhaps the nicest touch in this issue is Immelmann’s senile Gramps, whose deluded rants about Wi-Fi connections and cradling of a lifeless, cracked smartphone beautifully illustrate the fact that, in a world of escalating technological integration, the tech-savvy youth of today are destined to become the clueless Luddites of tomorrow.

Head over to Panel Syndicate to grab for the first issue of The Private Eye for however much you feel it’s worth. The file is available in PDF, CBR or CBZ format, as well as three languages: English, Spanish & Catalan.