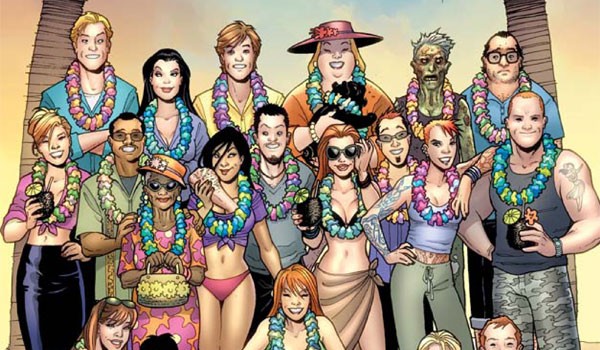 It can’t be easy plotting the first issue of a new comic book series. No matter how experienced the writer is, introducing over a dozen characters and nailing the overall themes and essence of the series, all while essentially telling the reader “this is what you can expect more of” is a precise art. The Last Resort, a new sexually-charged, zombie-infested take on the desert island castaways formula by comic veteran Jimmy Palmiotti and Justin Gray (21 Down) spends its first issue setting up the characters… only to forgo laying down its premise entirely.

There are three things that bothered me about this issue. Firstly, from reading ‘Two Goats’ I have no concrete idea as to what The Last Resort is going to offer. An opening scene sees a tourist beach attacked by an infected man. This leads in to a series of character introductions; people who are clearly going to be stranded on the tropical zombie resort depicted on the cover. Finally, a plane disaster. Secondly, with Lost currently dominating the imaginations of viewers worldwide, The Last Resort tags along too closely to the current trend of taking a specific genre and mixing it with the undead. The premier of Moonstone’s latest series Rotten, a fusion of zombie and western genres, managed to rise above the same problem with a taut plot and characters worth investing in. Here the passengers are all so egocentric and foul-mouthed that it’s hard to care about anyone in particular.

And lastly, I’ve been a fan of Palmiotti’s writing for some time, and though his dialogue is up to its usual standard here, something about The Last Resort left a bad taste in my mouth. The team’s insistence on sticking a pair of breasts on every other page only tinted the issue’s leisurely pacing in an unjustly derogatory light. Intelligent, dialogue-driven scenes? Great. Well-proportioned nymphomaniac beauties? Fine. On the same page, however, these polar opposites generally cancel each other out.

Still, as negative as this review has been so far, there’s actually a lot to like about The Last Resort – despite its uneven debut, I imagine that this series will read far better in trade paperback form. Caracuzzo’s watercolour art is gorgeous, and should suit the series’ imminent tropical setting perfectly. And while none of the characters were especially likeable, Palmiotti and Gray’s script injects a certain vigour into them that many other titles on the shelves lack.