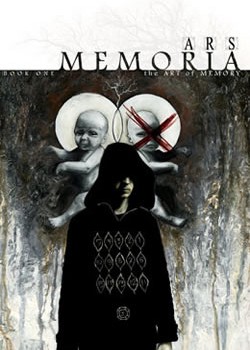 Years after witnessing his brother’s abduction by a pale stranger as a child, Augustus Lubert Das has been searching ever since. While mourning the recent loss of his mother, his is approached by a stranger who claims to know his brother’s whereabouts. Following her instructions he meets the entity known as Lapis and instigates a passage through his own murky memories. Ars Memoria Book One: ‘The Art of Memory’

Ars Memoria, the first book by Menton J. Matthews III, is testament to the potential realms of exploration that the comic medium is capable of, but rarely aspires to. It’s an existential journey disguised as a horror story, in which the protagonist begins by admitting to the comic reading observer that “I do not like your kind … the ones that read comics day in and day out. So they can be transported away to a fantasy world.”

Whether you find this violation of the Fourth Wall inspired or pretentious is pretty much an indication of whether you’ll enjoy Ars Memoria or not. In many ways ‘The Art of Memory’ felt like an extension of the reflective themes Neil Gaiman touched upon in Violent Cases and The Tragical Comedy or Comical Tragedy of Mr. Punch. As with those Gaiman efforts, Matthews III’s examination of memory supplies no definite answers; the human psyche is rarely that intelligible.

Menton J. Matthews III’s grim oil paintings are engrossing, and flaunt a diversity of approaches; whether his work would transmit such an intimacy if told via a more conventional comic style is highly unlikely. Checking out Matthews’ personal web page I wasn’t at all surprised to discover that he’s also a musician; his storytelling has more in common with the channelling of emotions and the subconscious that the best songwriters and artists such as Bacon delve into than the cheap thrills endlessly exploited by mainstream comic scribes.

Admittedly, Ars Memoria left me feeling bewildered, but in a most agreeable way. I look forward to seeing what Matthews will achieve next, be it a continuation of this series or another concept. The epilogue by Tim Hall Rudisill is equally fascinating, if somewhat impenetrable, stuff – but sometimes it’s nice to have more food presented to you than you can possibly eat in one sitting.

More details on Ars Memoria can be found at www.ars-memoria.com. 48 colour pages at $10.00, shipping included.