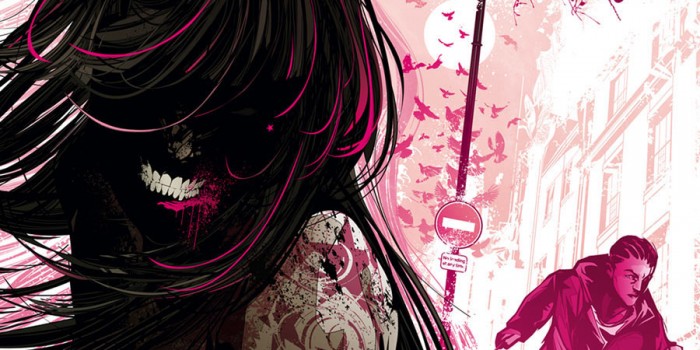 DC are continuing to sell the first issues of their latest Vertigo titles for just one dollar, which means there’s really no excuse not to try Peter Milligan’s Greek Street, a gritty soap set in London’s Soho in which the characters are destined to play out modern interpretations of Greek myths.

I didn’t realise this as I began reading ‘The Monster of Greek Street’, however, but soon clocked on to the various inspirations behind Milligan’s intertwining narratives. In one episode, an orphan seeks his mother only to wake up beside her in true Oedipus fashion, while in another a gang boss is forced to disfigure his son to honour a blood-for-blood pact. Between these tales an imprisoned seer looks into the future, forecasting doom for, well, everyone. A word of warning: this book is rather graphic. And by rather I mean that this issue alone features incest, animal cruelty, strippers aplenty… and tops it all off by the central character castrating himself with a shard of glass. One for the littluns, then. In Milligan’s defence none of this debauchery is glamorised in any way whatsoever, but the whole thing is so infinitely grim that you wish he’d stick just one humorous story or likeable character in there. While I’m sure a lot goes on behind Soho’s tourist-friendly façade besides strip joints and “massage parlours” I’ve dined and socialised in that region for over a decade without bearing witness to any of it.

Milligan, who was responsible for the inimitable 2000AD series Bad Company and the pop-tastic X-Force reboot with Mike Allred, amongst many others, has really come into his own with this series. Hopefully Greek Street will finally put him up there with the “big names” as he deserves to be. Gianfelice is well suited for the title, too, demonstrating a knack for conveying this taut noir drama onto the page.

One thing that hit me after reading this first issue is that, even when I couldn’t quite place the source stories behind Milligan’s modern retellings, the influence of these ancient tragedies has resonated throughout centuries of fiction. That Milligan doesn’t re-enact these classical stories too faithfully, adapting and warping them for contemporary stylings, makes Greek Street series all the more intriguing.