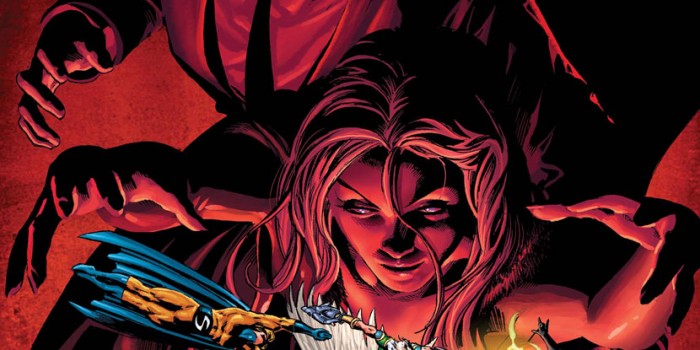 Matt Fraction takes the reins from Brian Bendis for several issues, as the Dark Avengers are sucked into the Utopia crossover, and the abrupt shift in tone is jarring to say the least. The perceptible atrophy of Osborn’s team that Bendis revelled in slowly cranking up has been pushed aside in favour of more old-fashioned superhero romp that hardly features the titular team at all.

All in all this was a pretty generic issue, with standard art by Luke Ross and a few interesting scenes that will possibly play major part in future man/mutant relations – not to mention Beast’s latest transformation courtesy of the mysterious Omega Machine. Matt Fraction juggles multiple plots well, but there’s simply too much going on here to allow him to concentrate on one character for more than several pages. Cyclops’ inability to restrain his fellow mutants and the increasingly conflicted Emma Frost are definitely the most interesting elements of this story arc, but the intersecting scenes of the Dark Avengers idly watching the action from afar only further emphasises the small part most of this team play in Utopia. With Utopia taking centre stage, it looks like we’ll also have to wait a few months to find out what happened to Captain Marvel, who, after a night with man-eater Moonstone, was shocked to discover that his team-mates were criminals. Bit of a naive lad, then. Despite being pictured on #6’s cover battling Venom and shown on this issue between the feuding Dark Avengers and Dark X-Men, he’s nowhere to be seen.

While Dark Avengers has been perfectly readable, the series has yet to deliver on its promising debut, and it’s unlikely that it will until Utopia is over. There’s nothing particularly terrible about this crossover, but one gets the feeling that everyone involved is labouring at the eleventh hour to fit the X-men into Dark Reign.