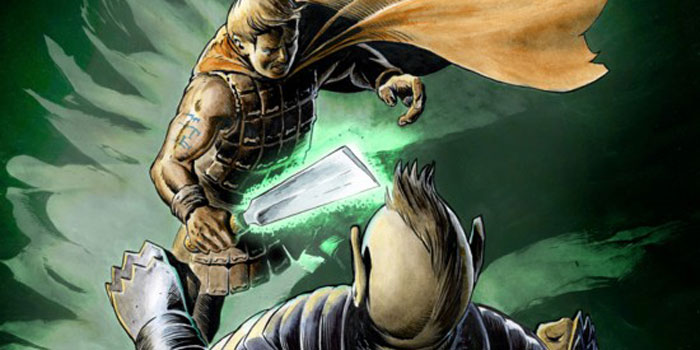 With beautiful hand-painted art printed on luscious waxy paper in a glossy perfect bound format, Patrik Magerius’ The Crannog Saga evokes the prestige format introduced by DC in the 80s. There’s not enough pages here to constitute a trade or graphic novel, but the presentation is beyond your average monthly title. But there’s a Scandinavian vibe to the Swedish creator’s world, folklore, names and costumes that sets it apart from its US cousins, not to mention a refreshing lack of reverence towards the prominent influences on fantasy comics such as Frank Frazetta, Slaine, Conan and Heavy Metal… and more recently, A Song of Ice and Fire.

One thing The Crannog Saga does share with that last example, however, is an abundance of plotlines. At least five groups of characters are introduced in this 35-page first issue, their paths often converging in ways that aren’t currently clear. The Azure Lady seeks the prophecy from a slumbering, subterranean creature. Three mercenaries attempt to manipulate the unrest in Bal Khunda, a city divided by an earthquake in which an elevated citadel now rules over those left below. A forager encounters a strange entity after she’s attacked and left for dead in the woods. A seemingly important artefact is stolen. Behind these subplots, the reader is provided snippets of a grander narrative involving such perennial themes as political skulduggery and social inequality.

Patrik’s delicate inks and watercolours draw us into his world with a painstaking attention to detail. I generally sidestep painted comics because their focus is so often on aesthetics over character or plot, but that isn’t the case here – Crannog’s very human characters are at the forefront. That’s not to say the book’s landscape, ostensibly based on medieval Europe, isn’t equally impressive. The world of Crannog reveals its more fantastical elements in tantalisingly brief scenes; including, in this issue’s most impressive moment, a bizarre tentacled entity that dwells behind a bronze “demon face” built into the side of a cliff.

The Crannog Saga is an impressive and engaging debut, and recommended to anyone seeking a more grounded form of high fantasy, though I have a feeling it’ll take a few more instalments to see the seeds this first issue plants reach full bloom. Magnerius throws this large array of characters, locations, subplots and themes into the mix without necessarily hinting where these strands are heading, but he introduces his characters and their relationships to one another with a clarity of storytelling and worldbuilding that instils confidence in the reader.

And let’s face it, you’ve taken one look at these interior pages and already made up your mind, haven’t you?

The Crannog Saga #1 is available now on Amazon (in both English and Swedish), and you can get updates on its follow-up by following creator Patrik Magnerius on instagram.com/crannogsaga/.