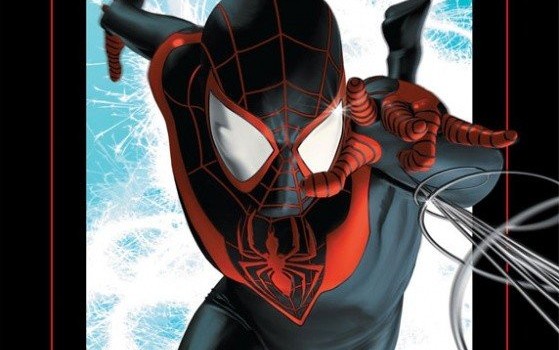 
Having grown as convoluted as its progenitor, Marvel’s Ultimate Universe has become a bit of an aimless alternative. Ever desperate to lure their extensive audience of cinemagoers into comic stores, The House of M gave its once beloved imprint a relaunch in 2009, complete with snazzy new cover stencils and a numbering reset. When that tried and tested marketing tactics failed (as it always does) to attract more than a brief spike in sales? Kill off Peter Parker and replace him with African American/Latino teenager Miles Morales. A ploy which has definitely paid off in the short term, with the mainstream media pouncing on the biracial newcomer with an enthusiasm not seen since Steve Rogers caught several bullets in the chest.

Well, three months have passed, the mania proved short-lived, and the series and its fresh-faced protagonist can now be judged on their own merits, ethnicity dispute be damned. But the initial diagnosis for Ultimate Spider-man Volume 3 isn’t particularly positive. Bendis’ pacing is characteristically languid; three issues in, and the much touted black and red costume has yet to make an appearance, as has any form of antagonist. Which wouldn’t necessarily be a criticism were Morales and his supporting cast a little more interesting. If nothing else, the reboot makes apparent just how timeless and effective Stan Lee’s superhero origins have proven themselves. Miles Morales’ backstory lacks clout; he’s essentially bitten by a similar brand of genetically-engineered spider as that which bestowed Parker his inimitable powers while visiting a ne’er-do-well uncle. Only trivial tweaks were needed to retell Spidey for the 2000 crowd, and the appeal behind those early instalments was seeing just how far Bendis was willing to reinvent such series staples as the web-shooters, Gwen Stacy and Venom. The Medales mythology sorely needs an Uncle Ben, a moral compass that will guide Miles throughout this protracted origin tale, but so far we’ve met but a handful of characters: the aforementioned Uncle Aaron (who just happens to be the Prowler), Miles’ caring father and buffoonish best bud Ganke.

On the other hand… Ultimate Spider-man #1 clearly isn’t intended for the Multiverse crowd. This is a gateway comic, a potential first fix for many younger readers whose exposure to the character will likely have been limited to the movies, animated series, video games and action figure lines. These comic rookies may just find a lot to like about Marvel’s new alternate Spidey, and to such readers the obligatory save-child-from-burning-building power testing scenario in Issue 3 will be received as an assurance rather than an  eye-rolling cliché.

It’s an inoffensive new start then, if only for the uninitiated. Sara Pichelli’s art is clean, bold and inviting, as are Justin Ponsor’s colours. Morales’ powers are still undefined – invisibility appears to be a new trick – but on the whole the series is off to a routine but solid start, with just enough to titillate and little to alienate. Excluding a nice Amazing Friends nod, there’s little in the way of references to the series’ history, either, or even the Ultimate Marvel Universe as a whole – a move that will no doubt satisfy and incense in equal measure.