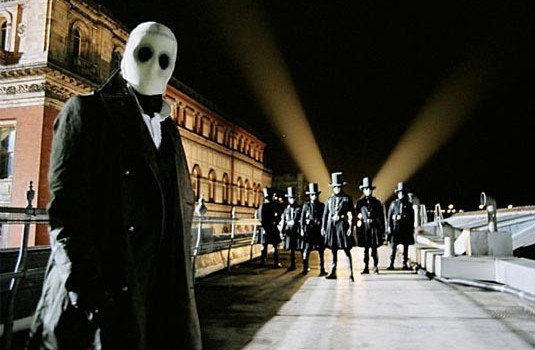 Franklyn is a mess of ideas. Several entirely different films so bizarrely tangled into one another that even the keenest viewer will eventually give up trying to fit this puzzle’s pieces together and accept that the film simply cannot, will not, make sense by the time the credits roll. Does it matter if a film is entirely coherent? Either way, the movie contains four interlocking narratives. In the futuristic Meanwhile City, a fantasy world where each individual is legally obliged to pick and worship one of the thousands of religions on offer, masked atheist Jonathon Preest (Ryan Phillippe) is on a quest to find and kill the sinister spiritual leader The Individual. In a more recognisable reality, pretentious student Emilia (Eva Green) repeatedly attempts suicide for an art project, while elsewhere befuddled youngster Milo (Control’s Sam Riley) returns from Cambridge unable to recover from his childhood sweetheart. And somewhere else in the background of all this is a priest (Bernard Hill) wandering London in search of his missing son.

By interlocking narratives, I’m not suggesting that these tales eventually unite in the sense that Amores Perros or Crash do; rather, they exist as separate realities. As each character’s search deepens their journeys don’t so much convene as slightly overlap. Franklyn was shot on a $6 million dollar budget, but the elaborately towering landscape of Meanwhile City and excellent cast might fool you into thinking it cost twice that. It’s nice to see actors who’ve been chosen for their roles due to appropriateness rather than star factor. Eva Green’s art student is every bit the madam that she was in The Dreamers, while Sam Riley embodies the same frailties that made his turn as Ian Curtis so engaging. And may the numerous Gods of cinema bless Bernard Hill, whose desperate father adds a warmth and humanity to the movie that the other more ambitious segments occasionally forsake. Critics have been tough on Franklyn, which is not only unfair but worrying. Sure, Gerald McMorrow’s debut is a heavily faulted one, but it’s a brave movie that’s astonishingly creative and seldom boring. Preest’s Rorschach inspired attire and the fantastical cityscapes of Meanwhile may dupe certain viewers into thinking this is a comic book movie. For a small portion it arguably is. Like Darren Aronofsky’s The Fountain or Donnie Darko, it’s a film that invites audiences to fill in the blanks themselves. If you’re that regular variety of spectator who thinks this all sounds like hard work, then I’d advise you not to bother with Franklyn.

Some films are so idiosyncratic that it’s impossible to bring objective criticism down upon them. Check Franklyn out. Love it for its ponderousness, or hate it for its self-importance. At the very least it’s a film that’s sure to get a reaction; and in a world where apathetic masses flock to see the equally incomprehensible but not nearly as interesting Transformers sequel without questioning it once, that’s surely a good thing.