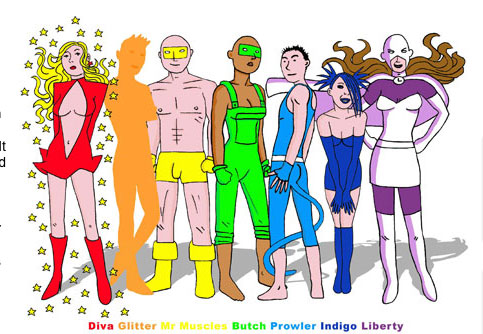 While Northstar has been out of the closet for years, and Apollo and Midnighter are no longer an item but a married couple, Martin Eden’s Spandex has proudly claimed the title of “Britain’s first all gay superhero team” – a claim which I’m willing to believe that someone else can/will contest.

The O-Men creator’s technicolour Brighton-based super-team will be “doing battle with 50-foot lesbians, a group of deadly pink ninjas, and their own complicated love lives” in the innuendo laden Spandex: Fast and Hard. The first trade paperback, which collects issues 1-3, will be released this May courtesy of Titan Books. Meet the superhero team Spandex; the glamorous transvestite super-hero called Liberty, a powerful lesbian named Diva, a beautiful French teleporter known as Indigo, Prowler who absorbs the abilities of gay people, Glitter with the ability to transform himself into light, and a rock hard pair of twins: Mr Muscle and Butch. Chock-full of humour and drama, romance and action, Spandex is a super-hero story like no other.

Martin Eden writes “There aren’t many gay super-heroes around, and there’s never been all-gay super-team –  until now! This comic has been a labour of love for me – it’s fun and experimental, and I’m really excited about taking the characters and the comic to a much wider audience.”

This is the very first collection of the self-published super-hero story that took the indie comics community by storm; nominated for the ‘Best British Comic’ at the prestigious Eagle Awards, the comic has received excellent reviews and critical acclaim. Spandex: Fast and Hard collects Spandex #1–3, and includes a bonus afterword and character biographies with commentary from Martin Eden