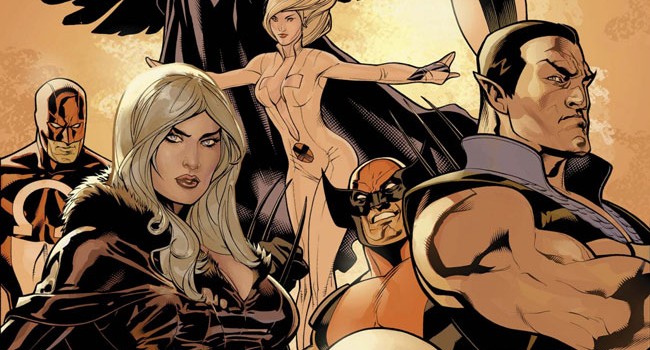 While coalition marches erupt throughout San Francisco, Emma Frost has now become the Black Queen, and will be leading her own warped version of the X-men as implemented by Norman Osborn. This new team consists of Cloak and Dagger, Mimic, Weapon Omega, Dark Beast, Daken and, on Frost’s request, Namor. We also find out that the imitation Charles Xavier who has been working alongside Osborn is none other than Mystique… which was the most obvious choice, really. My foremost reservation about the entire Dark X-men concept is that it’s being done better elsewhere. Second-rate villain (and one of the first X-men) Mimic is an interesting inclusion to the team, as he appears to genuinely want to do good, but this has already been covered numerous times in Thunderbolts. And reformed junkies Cloak and Dagger are clearly filling in the position held by Sentry in the Dark Avengers; that of the members most likely to grow consciences and go rogue.

To his credit Matt Fraction does wryly poke fun at this. Just as Osborn’s plans for the American Son reflected Marvel’s treatment of Captain America, his decision to place Daken into both teams as a gateway brand (“Turns out people love Wolverine. Can’t get enough of him. Who knew?”) is a stroke of genius. The team’s new costume designs are also great.

If nothing else, Utopia is proving to be an excellent story arc for new readers to jump onto. Fraction’s old school racial allegory is far easier to connect to than the majority of recent X-plots, and this crossover event is currently at the centre of Dark Reign, despite not having its ubiquitous seal branded all over the cover.