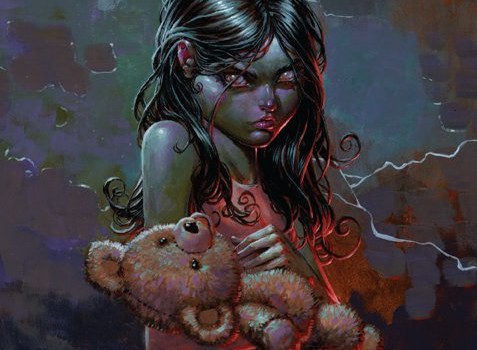 The Waking’s is a decidedly old-fashioned horror story, a Gothic tale in which the dead are seemingly returning from the grave to exact revenge on their killers. Unlike many other horror titles, the gore quota is downplayed in favour of a thoughtful, intricate narrative told from the perspectives of four jaded detectives. These aren’t the brain-chomping zombies that have oversaturated the comic market of late, but tragic souls who refuse to rest for good reason. There’s a hell of a lot going on in this issue, but Raven Gregory’s script deftly balances the intertwining plot threads. A drunk driver responsible for the death of his wife and granddaughter is himself run over. Another man is found in a pool of his own blood; his wounds suggest that someone has reopened the same small lacerations again and again. A mentally ill vagrant keeps his daughter locked up for reasons unknown. These plots are clearly all related, and it’s the how and why that makes The Waking so engrossing.

Raven Gregory has received a fair amount of acclaim with his series The Gift, an independent comic that was bought by Image Comics, and his knack for writing dialogue lifts The Waking above similar fare. However, Gregory’s script occasionally falters when it gets too witty for the book’s own good, and several of the stereotypical characters stick out of the grim, colourless cityscape like neon lights. The presently unnamed narrator’s nymphomaniac wife, Betty, seems to have walked in from an entirely different comic; presumably a pornographic one.

Vic Drujiniu’s art is similarly torn between a cinematic, supernatural detective story, and images of the sort of glossy pin-up babes that Zenescope has generally specialised since its numerous Grimm Fairy Tales series proved such hits. It doesn’t say much for Officer Vanessa Pelagreno’s sleuthing skills that she needs to parade her cleavage while visiting a late night murder scene in the pouring rain. The Waking is still a nice looking book, though, and Mark Robert’s palette really brings out some of the night-time scenes, but it’s so disheartening that so many comic artists/publishers choose to bring down mature and intelligent tales such as this by catering to the lowest common denominator.

Misogynistic tendencies aside, The Waking is a solid read, and while this first issue merely hints at how the various macabre incidents are related, this four-part series looks to get very interesting indeed as it gathers momentum next month.