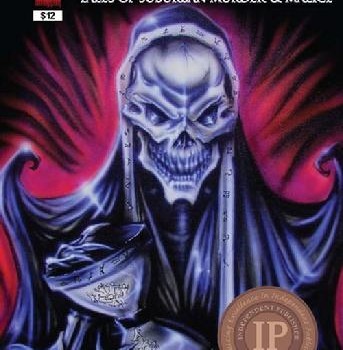 The good ol’ fashioned horror comic is alive and kicking like an angry reanimated corpse in Bone Chiller, an anthology of ghoulish tales from screenwriter Robert M. Heske. The standard many such horror showcases seemingly aspire to was long ago set by the tongue-in-cheek EC Comics titles of the 1950, Tales from the Crypt being the most eminent. Yet though elements of the supernatural do work their way into Heske’s short stories, his pieces are far more psychological in nature, and often play on the lingering suspicion that your friends and neighbours are up to some sinister acts behind closed doors and picket fences.

The book was originally published as Cold Blooded Chillers: Tales of Suburban Murder & Malice across three issues, which have been arranged into the thematic chapters Femme Fatales, Mistrust Thy Neighbor and Someone is Watching. The titles alone should give you an idea of what to expect in each. The tales vary greatly in style and length; some are only 4-6 pages long, while several would fill almost an entire issue.

Femme Fatales begins with Her First Day Alone, in which a woman is haunted by the death of her child. In the concise but wonderfully illustrated False Pretenses, the tables are turned on an arrogant lothario and The Waiting Room sees a man’s past and conscious catch up with him in the kind of ironic way that could only happen in a gruesome horror parable. Mistrust Thy Neighbour features the supernatural trick ‘r’ treat caper Misnomer and twist and turns aplenty in Dead Dog, in which a reclusive writer is interrupted by the discovery of a mangled pooch on his front lawn.

Someone is Watching features by far my favourite of Heske’s offerings, the ambiguous Synchronicity. Lifted by some seriously atmospheric art by Dirk Shearer, ‘Synchronicity’ concerns a suicidal woman who is spared from a bloody massacre by a group of mysterious, faceless entities known as the midwayers, and has an ethereal quality reminiscent of Ray Bradbury’s early work. As does the eerie Transcendence, in which a security guard working night shifts at an aquarium is haunted by visions of his dead daughter. Great art by Reno Maniquis, too. Shadow, the story of an abused child, was a bit too graphic for my tastes, but the ending just about justifies this grim segment.

The volume also includes an additional chapter, Extra Pieces, which includes an illustrated film script entitled Alibi, as well as another brief comic short Shopper’s Nightmare. Oddly enough, ‘Alibi’ is by far the most intricate and intelligent story in this collection, a crime drama in which an allegedly upright husband claims to have murdered his daughter while sleepwalking. It’s a clever little yarn, with a tragic conclusion that I truly did not see coming.

All in all, there’s something for all horror fans in Bone Chiller, whichever corners of the genre your tastes lean towards. The art is consistently good, and while several of Heske’s tales are a tad predictable – there’s only so many directions these narratives can head in, after all – his knack for believable characters in ostensibly mundane situations makes Bone Chiller a thoroughly absorbing read.

Bone Chiller can be purchased from a number of online retailers, including Amazon. Cover price $12. A digital copy is available from DriveThruComics.com for just $3.50. For more details, visit www.coldbloodedchillers.com.