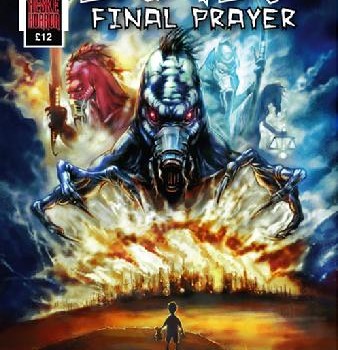 Almost the paperback equivalent of the billboard-hauling loon preaching “the end is nigh”, 2012: Final Prayer is a hugely enjoyable anthology of sequential art, short stories and bizarre rants that prophesise the possible end of the world alongside the conclusion of the Myan Long Calendar. How, or indeed why, the world will end in two years time, nobody is quite sure – the perfect subject for independent comic talent to explore our impending apocalypse with as much creativity as is humanly possible, then.

One of the most pleasing surprises with 2012: Final Prayer is that few of these “predictions” are even remotely plausible. Instead the writers and artist involved have tried to outdo one another with some of the most absurd yet creative Armageddons you’re (not) likely to perish horrifically through. In the superb Bird’s Eye View by Arno Hunter and David Edwards, for example, a lone astronaut drifts pointlessly in a shuttle as he watches the earth crack open like an egg and something unfathomable hatch from our humble rock.

On a whole, these more absurd visions are by far the most enjoyable. Dino Caruso and Sami Kivela’s Hollow Victory, in which a soldier is sent forward in time to observe and report the reason behind man’s demise, only to find pretty much every doomsday scenario occurring simultaneously, evokes the pulpy origins of 2000AD. Duncan Eagleson’s stylish Harkington is less inspired by the likes of Ray Bradbury and more the prelude to a post-apocalyptic samurai tale. With flesh-eating monsters, naturally.

My other personal favourites included: 2012: Apocalypse in Five Parts (Shamere Borg, Xander Bennett and Melanie Cookie), a uniquely illustrated piece that simultaneously narrates the reactions of five disparate individuals to their impending doom. Arno Hunter’s prose short, Annihilation Revelation, is a hilariously bleak parody on the archetypically loony U.F.O. witness, with a brilliant twist in the last paragraph that you just will not see coming. And Robert Heske’s eerie Synchronicity, illustrated Dirk Shearer, also makes a welcome return, having previously been printed in Heske Horror’s Bone Chiller.

Yes, it’s a diverse collection all right, and there are far too many worthwhile contributions to go into detail here. The appeal in such anthologies is that you never quite know what you’re going to get, and 2012: Final Prayer has horror, humour and utter weirdness in spades. It’s a pleasing hark back to an era of science fiction and fantasy storytelling that thrived on big, abstract ideas rather than the theoretical science behind them.

Though if I were you I’d grab a copy soon. The clock is ticking.

Bone Chiller can be purchased from a number of online retailers, including Amazon. Cover price $12. A digital copy is available from DriveThruComics.com for just $4.99. For more details, visit www.coldbloodedchillers.com.