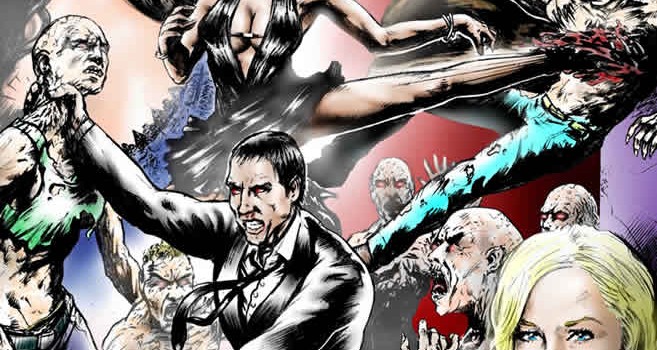 With so many writers and artists currently struggling to make a living, it’s rare that we see comics being put to such a good cause as Black Snake Studios’ new Comics Fighting Cancer charity initiative, which commences with the release of RIP #1 this month.

Comics Fighting Cancer is a new way to donate to fight cancer! All Profits will go towards The National Foundation for Cancer Research. What makes this project unique is the fact that our comic is completely donor funded. Every page of this comic was paid for by people wanting to create a change and find a cure for cancer. We hope you will join us in the fight against cancer.

So, basically, for just a few quid you to get to aid cancer and receive either a digital or printed edition of the RIP comic book in return. The site has a list of the amounts you can pledge, and what you’ll get in turn. So, spare a dollar and you’ll receive a digital copy of RIP #1, while a few dollars more will see name printed in the acknowledgments section, and a signed edition of the book.

And here’s a brief plot synopsis of the comic in question, RIP #1:

Two years ago he lost everything that he had ever loved. The vampires took her from him and he wants her back. It is their unusual appetite and uncontrollable cravings that set them apart from the ones that they hunt, but to the humans, they look somewhat normal. He knows better. With the help of high tech friend Chet and the curiously flawless and sexy Anaya, RIP will not stop until he gets his wife back, along with all of the missing. However, after RIP finds out that local doctors and scientists have become a few of the many that were taken, he begins to fear for the purity of the entire human race. With the motivation and power to kill any vampire that stands in his way, and the knowledge of exactly how to do it, RIP becomes an unstoppable force that not even the many faces of immortality can match.

All in all, Comics Fighting Cancer is an impossible cause to argue against donating just a few dollars via Paypal. Physical copies will be available in selected US retail outlets in April, with digital copies soon to be available on both Panelfly and Drive Thru Comics. For more information visit BlackSnakeStudios.com.

And if you want to look ultra-stylish while you fight the battle against cancer, the latest episode of Katarina Emgård’s webcomic/fashion store fusion is up at kisenja.com.