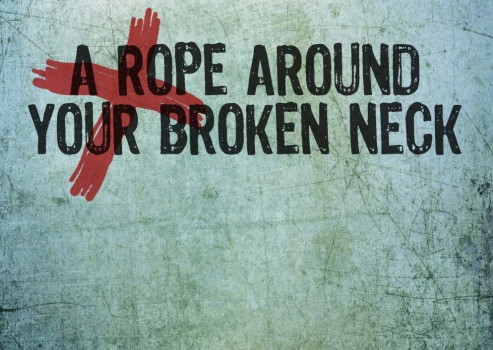 Ouch. You’ll probably not find a more brutally named comic than A Rope Around Your Broken Neck, but it’s a fittingly severe title for this grim tale of the relationship between an imprisoned priest and a prison guard turned executioner in plague-infected London, 1665. A Rope Around Your Broken Neck

The Great Plague is killing thousands at a relentless pace, and King Charles II has fled the Tower of London, leaving only an increasingly deranged guard to deal with the infected criminals held captive within.  Covered from head to toe in plague doctor apparel, the lone warden callously executes anyone who attempts to escape, but is astonished to find that prisoner Father Alvaro Aranda, whose faith in God remains undiminished, is the only inmate to show no signs of the Black Death.

A Rope Around Your Broken Neck is the third of Martin Ian Smith’s historical horror one-offs, and as Smith demonstrated with the gruesome World War II chiller Paralysis, he’s well aware of the importance of setting in period fiction. Those with a reasonable knowledge of British history will know that the Great Plague was the last widespread outbreak of the bubonic plague in Britain, ending a year after this book is set; and it’s this hindsight that gives the book its oomph. We know that the plague will soon end, that London will ultimately recover, but the panic-stricken characters concerned have good reason to believe that the end of the world is nigh, and abandon all rational thought.

As with any book with multiple artists, A Rope Around Your Broken Neck suffers from inconsistency at times, but it’s an atmospheric read nevertheless. A particularly graphic scene, in which the insane plague doctor improvises with a large mallet during a makeshift hanging, is visceral enough to play on the minds of all but the sternest of readers. The Tower of London itself is also meticulously rendered, with photographs and existing historical art are integrated into Ricardo and Brondo’s illustrations at certain points.

A Rope Around Your Broken Neck is a unique little book, to be sure, with a conclusion that is surprisingly uplifting. For while its subject matter is superficially as morbid as Martin Smith’s previous Attackosaur efforts Paralysis and The Mutilated Dead, there’s an optimism regarding the nature of humanity during crisis that those books lacked. In short, it’s a thematically mature book that could only have come from the indie comic book scene.

A rope Around Your Broken Neck can be purchased from attackosaur.com for just £2.00 (plus 50p postage) via Paypal.