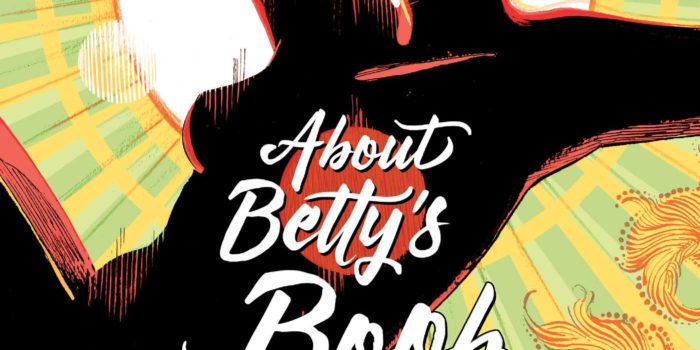 In stark contrast to much-hyped video games and movie releases, one of my favourite things about creator-owned comics is that I tend to enter them with only a vague idea of what to expect. Case in point: About Betty’s Boob, which I naturally assumed would be an autobiographical take on one woman’s mastectomy, touching and ultimately either tragic or uplifting. But while Véro Cazot and Julie Rocheleau’s sweet-natured book takes readers on an emotional journey it’s not interested in examining its subject too deeply, instead using the themes of incompleteness, transformation and Betty’s insecurities regarding her compromised femininity to tell a vivacious and extremely fantastical tale.

This virtually “silent” graphic novel begins with Betty waking in a hospital bed, having dreamt that crabs have nipped away her left breast, minus said breast and a head of hair. Betty’s life in fairy tale Paris seemingly continues to fall apart when she loses her partner and her job in quick succession, but salvation comes when she quite literally stumbles upon a travelling burlesque troupe, who undertake the lost soul and teach her to celebrate her newfound uniqueness.

About Betty’s Boob is a sweet-natured and whimsical book with a clear body positive message, then, though while many will embrace it for its subject matter, they’ll likely best remember Julie Rocheleau’s art. Her vivid imagery and loose character designs resemble the storyboards for an animated feature, albeit one our world probably isn’t quite ready for. There’s a confidence and spontaneity to her work that makes every page such a joy to read; I often hesitated to turn the page for fear that I’d missed out on some exquisite detail in the background. I suspect that About Betty’s Boob’s fluffy approach will prove divisive with some readers – some will celebrate Cazot’s lightness of touch while others may criticise her depiction of breast cancer for barely delving below the surface. The plot didn’t particularly pluck my heartstrings and the unrelenting cheeriness does occasionally rob the book of authenticity, particularly in Betty’s boyfriend’s ruthless reaction to her physical changes, but I appreciated the creators’ intentions to replace sentimentally with positivity. There’s enough of those books on the market already.

Amidst Rocheleau’s elaborate set pieces (Betty’s rooftop pursuit of an airborne wig is one of many highlights) and triumphant dream sequences there’s some breathtakingly subtle touches, such as Betty’s surviving nipple shining through a suitor’s embrace, that attest the power of imagery over words. About Betty’s Boob is simply a beautiful book, a straightforward story told with heart and finesse. Sometimes that’s enough. The English translation of About Betty’s Boob is published by Archaia and available now.